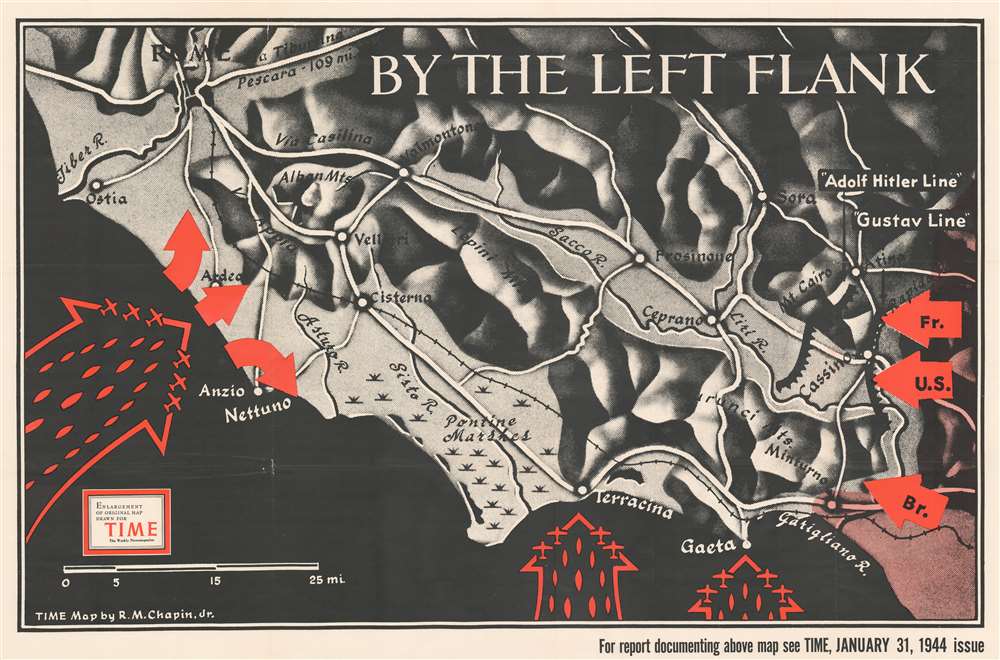 Highlights the Allied landing at Anzio only nine days afterward.

This is a 1944 Robert M. Chapin, Jr. map of central Italy the week after the Allied landing at Anzio. The map depicts the region from the Mediterranean Sea to Atina and Sora and from Rome to Miturno and Cassino. Red icons are used to mark the Allied landing at Anzio, which took place on January 22, 1944, in an effort to break the stalemate along the German 'Gustav Line' at Cassino. Barbed lines highlight the German's fortified positions in front of the advancing American, British, and French troops who had been advancing north from Salerno since September 1943. Roads are illustrated in white, with the regions rivers also noted.

By November 1943, it was obvious that a stalemate existed along the Gustav Line halfway between Salerno and Rome. The Allied commander in chief of the Italian Campaign, British General Sir Harold Alexander, decidedthat yet another amphibious landing would be necessary to break the stalemate and it was set for January 1944. Two augmented infantry divisions were deemed necessary, to which historian Samuel Eliot Morison retorted, 'Either it was a job for a full army, or it was no job at all; to attempt it with only two divisions was to send a boy on a man's errand'. The landings, which had weeks of inauspicious preparations, went off smoothly on the morning of January 22, 1944, and were mostly unopposed. Allied troops managed to push a few miles inland and set a perimeter around the beachhead. By the end of the first day, over 36,000 men and 3,000 vehicles had been landed. But that easy success was not to last, as within two days later the Germans had regrouped and savagely counterattacked, pushing the American and British troops back to within sight of the beach. Here, yet another stalemate began, and lasted from the beginning of February until the end of May, when the Allies finally broke through the Gustav Line and the Germans were forced to withdraw north of Rome, which was liberated on June 4, 1944.

This map was drawn by Robert M. Chapin, Jr. to accompany an article in TIME Magazine which was published in the January 31, 1944 issue. TIME subsequently published this edition of the map separately. The OCLC records two examples as being part of the institutional collections at Franklin and Marshall College and Wichita State University.

Very good. Even overall toning. Verso repairs to fold separations and at fold intersections. Closed tear extending 2.5 inches into printed area from top margin professionally repaired on verso. Blank on verso. Has old institutional collection stamp on verso. We have contacted the institution to verify that this item was legally deaccessioned.