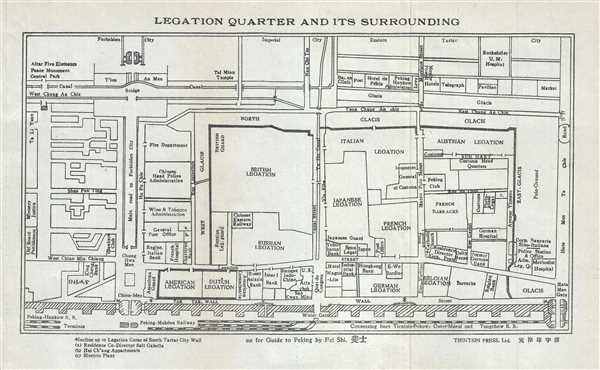 Illustrates in detail the Legation Quarter of Beijing - labels the American and British legations!
$450.00

This is a 1924 Fei-Shi map of the Legation Quarter and its surroundings in Beijing / Peking, China. The map depicts the Legation Quarter as it was in 1924, surrounded by walls with four gates: three opening into the Chinese City and one into the Tartar City. The Legation Quarter itself occupied part of the Tartar City, with numerous foreign legations in residence, including British, French, American, Italian, Japanese, Russian, German, and Belgian legations, among several others. Each of these legations is labeled on the map, along with hospitals, a fire department, the Chinese Head Police Administration, and several banks, most of which were foreign–based.

The Legation Quarter as it is depicted here emerged following the Boxer Rebellion. The Quarter began to take shape after the Second Opium War, when the British, French, American, and Russian legations moved into the district in accordance with the Treaty of Tientsin, signed in 1861. By 1900, all of the legations in Beijing had followed suit. During the Boxer Rebellion, Boxers besieged the Quarter for several months, causing an international incident. After the siege was broken by the Eight-Nation Alliance at the end of the Battle of Peking, several concessions were made to the foreign powers.

In the terms of the Boxer Protocol, foreign powers were granted the right to station troops in the Quarter to protect their legations. These installations are labeled on this example, with the American, British, French, and Japanese guards labeled. The Quarter was also encircled by a wall, effectively separating it from the rest of the city. Chinese residents were ordered to relocate, and the Legation Quarter effectively became a city within the larger city of Beijing. Chinese residents grew to resent the Quarter as a symbol of foreign dominance.

This map was produced for Fei-Shi's Guide to Peking and its Environs and published in 1924.

Fei-Shi, Guide to Peking and its Environs Near and Far, (Tientsin and Peking: Tientsin Press) 1924.

Very good. A minor reinforcement on verso. Blank on verso.
Looking for a high-resolution scan of this?