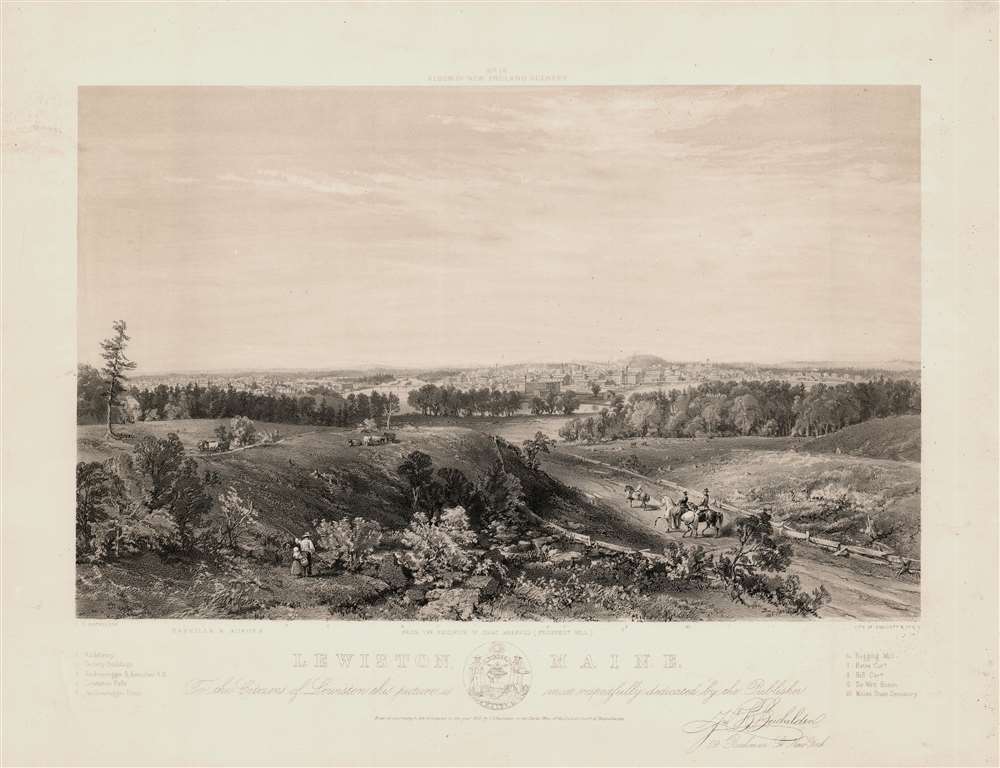 An outstanding two-color 1856 lithograph view of Lewiston, Maine by John D. Bachelder, the famous chronicler of the Battle of Gettysburg. The view looks on Lewiston from Prospect Hill, a high point to the west, across the Androscoggin River, then the property of Isaac Haskell. Bachelder presents Lewiston as a bustling city, with significant mill and industrial activity, set amongst the natural splendor of rural New England. Ten specific locations are identified numerically, corresponding to numbered tables below the map. Today Lewiston is Maine's second largest city.

This is no. 14 of a series of New England town and scenery views published by John D. Bachelder in 1856. The view follows Bachelder's brief career as a colonel in the Pennsylvania State Militia. Still a young man, Bachelder left the lucrative military position to pursue his passion as a landscape artist. Returning to his native New Hampshire, he completed a series of twenty views of New England entitled Album of New England Scenery. It was during this period, from 1853 to 1860, that Bachelder developed the skills at landscape art and viewmaking that would serve him so well in his attempts to minutely capture the Battle of Gettysburg.

The view was drawn by Bachelder in 1856. It was subsequently engraved by Endicott and Company of New York. This view is uncommon. The OCLC identifies two institutional holdings, at the Boston Atheneum and at the American Textile History Museum Library. We have identified one further holding at the Yale University Art Collection. Scarce to the market.