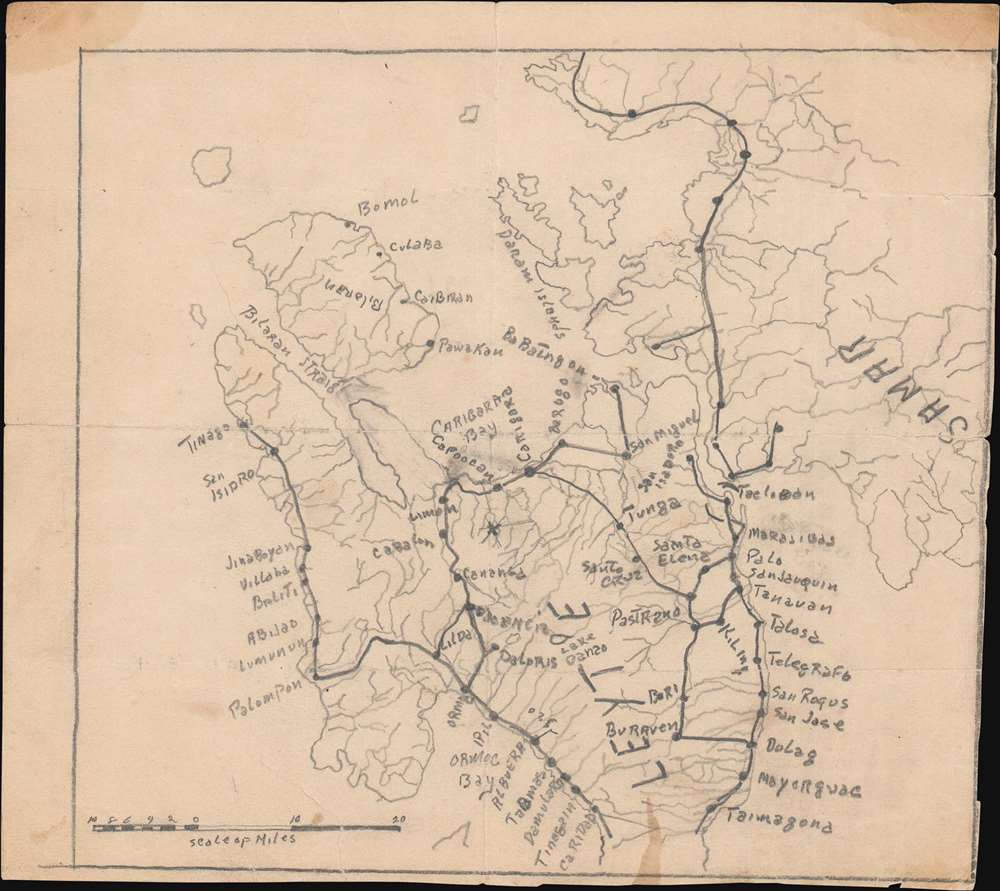 A one-of-a-kind manuscript road map of Leyte during the Battle of the Philippines.
$950.00

This is a one-of-a-kind c. 1945 manuscript road map of Leyte, the Philippines, drawn during the Battle of the Philippines. The base map was likely traced from a source map, given the level of detail present along the coastlines and the courses of the rivers, but the roads were drawn freehand. Towns along Leyte's coastlines are labeled, as are several bays.

Maps and the Preparation for the Leyte Invasion

An eight volume series of reports entitled Engineers of the Southwest Pacific 1941 - 1945. Reports of Operations United States Army Forces in the Far East Southwest Pacific Area Army Forces, Pacific. was produced by the Office of the Chief Engineer, General Headquarters, Army Forces, Pacific, between 1947 and 1950. In Volume VIII, entitled 'Critique', the Office of the Engineer analyzes the conduct of the entire war in the Pacific with regard to the engineers from the defense of the Philippines in beginning in December 1941 through the end of the war. Chapter VI focuses on the Philippine Campaign and provides some insight into the state of the maps provided to the engineers prior to the invasion.

The advance of D-Day to 20 October 1944 left insufficient time for Sixth Army and subordinate units to become familiar with the anticipated engineering problems of the Leyte operation and to plan a course of action. This was especially true in regard to the special training of units, equipment supply, and map supply. Maps and photographs available for detailed study and planning of engineering problems of the far shore were not generally suitable for the purpose. The only detailed coverage of the island, and that only around the coast lines, was a 1 : 200,000 U.S. Coast and Geodetic Survey map. Some prewar 1 : 25,000 maps of the east coast were available, but were very inaccurate, and, the coverage extended only about 1 mile inland from the coast. As a result, 1 : 50,000 sketch maps of the area to be occupied were hastily prepared and distributed. The two topographic companies (corps) were placed under Sixth Army control and assigned the task of completing additional 1 : 50,000 sheets by blowing up (emphasis in original) existing intermediate-scale maps, which had been corrected from limited available photography, for use when the combat units would advance inland and beyond the limits of the sketch maps originally distributed. The resultant maps, providing poor and inaccurate coverage, were all that was available to the completion of the operation.

Since this map is a road map, it was likely drawn by someone in the logistics and supply division of one of the branches of the military. If the engineers, who would have desperately needed accurate maps to efficiently accomplish their objectives in combat, did not have maps available to them, then the likelihood that logistics and supply personnel had access to maps is very small, a reality that would lend itself to hand drawing maps. This piece, which is sketched on the back of part of a page out of an autobody manual, may even have been drawn on the job, as soldiers learned the routes and waypoints.

As this map is both undated and unsigned, very little information about its creator is available to us. Given that it was drawn on the back of part of a page out of a manual, it was likely drawn by a soldier that needed a map of Leyte and did not have access to a printed one. This manuscript map is one-of-a-kind and we are aware of no other similar artifacts.

Good. Closed tear extending one inch into drawn area professionally repaired on verso. Verso repairs to fold separations. Printed text on verso.
Looking for a high-resolution scan of this?