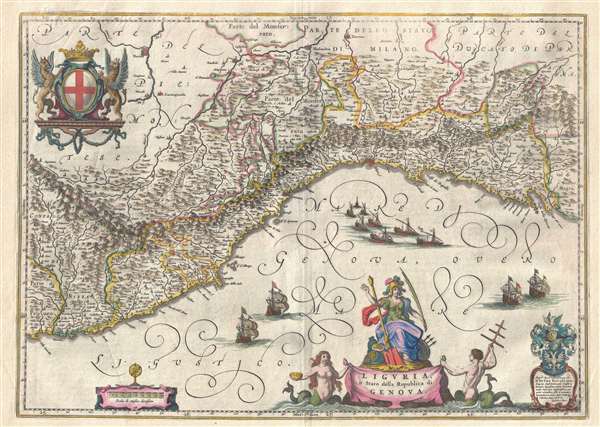 This gorgeous 1646 Willaem Janszoon Blaeu map depicts the Mediterranean coast of France and Italy, or as it was known then Liguria or the Republic of Genova. It stretches from Nice (Nizza) to Genoa (Genoua) and the Cinque Terre. There is a large, decorative cartouche with a large allegorical representation of Genoa. There is a second decorative cartouche with a dedication to D. Petro Hasselaer to the right. The sea is filled with sailing ships, possibly representing the formidable size and strength of the Genovese navy. The coat of arms of the Republic of Genoa appears at the upper-left. The Republic of Genoa was an independent state from 1005 to 1797, when it was fell to the armies of Napoleon Bonaparte. Today, the Cinque Terre, five fishing villages along the coast, are a world heritage site and are world famous, bringing tourists from every part of the world to the Ligurian coast.