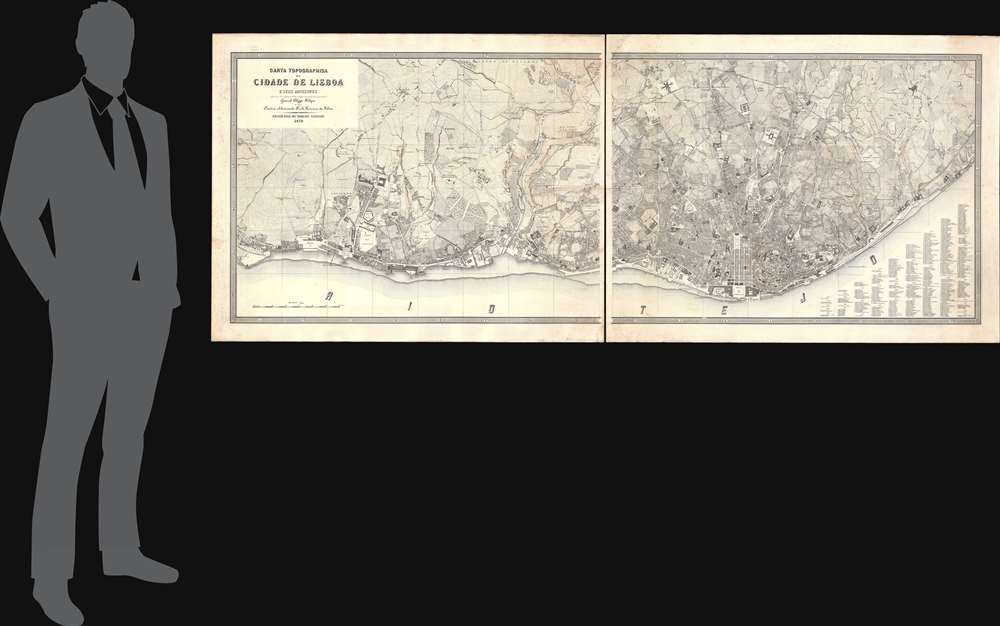 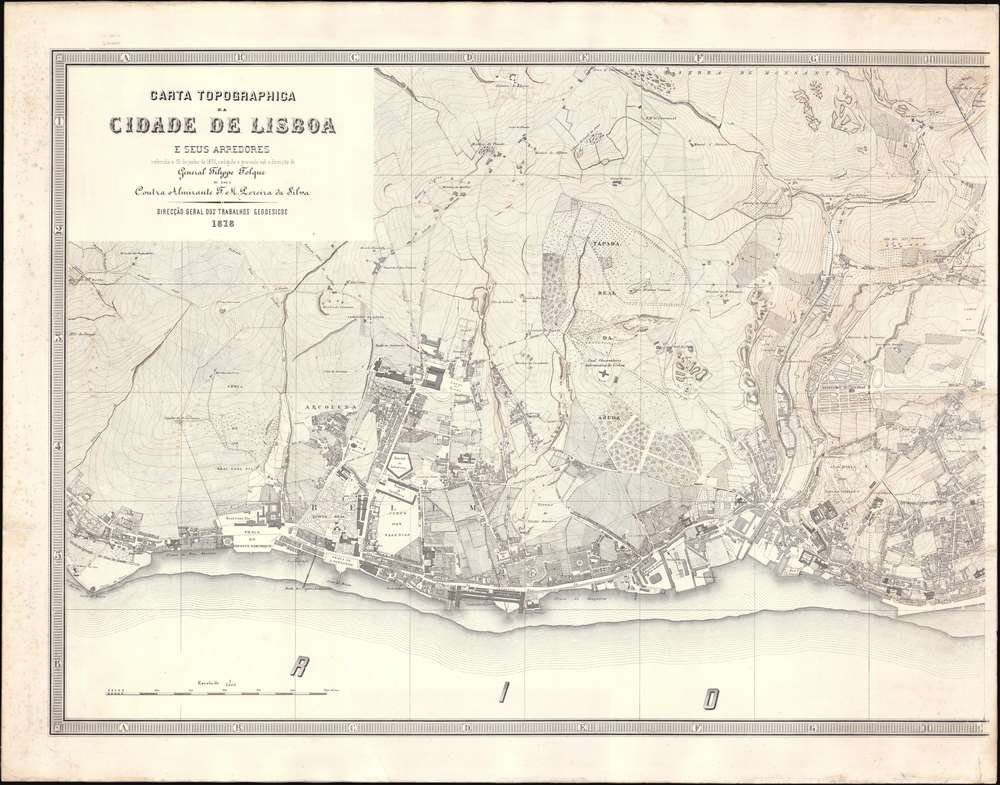 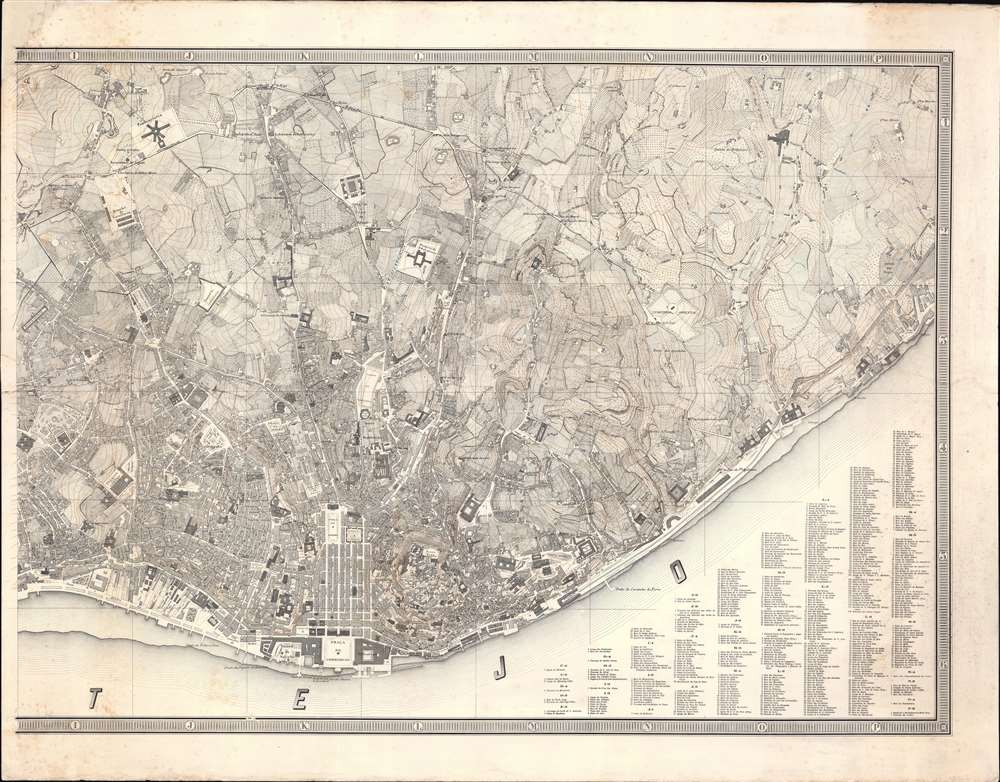 An outstanding 1878 first-edition large scale map of Lisbon, Portugal - this is largest and best printed map of Lisbon to appear in the second half of the 19th century, and the definitive plan of that city during the transformative Fontismo period. The map is presented in two enormous sections, which, if joined, would measure some 90 inches wide. It reveals individual city blocks, streets, and public squares, and in many cases, names individual buildings. Overprinting in orange ink - doubtless a separate printing plate, offers contours illustrating Lisbon's dramatic topography.

This map appeared during the Fontismo (1868 - 1889), a twenty-year period of stability and prosperity in Portugal between the Regeneração ('Regerneration', 1868) and the 1889 financial collapse. The era is named after Fontes Pereira de Melo (1819 - 1887). Melo was a reformist politician who, after the Regeneração, was put in charge of the newly created Ministry of Public Works. He began a series of ambitions public works, largely financed by British banks, intended to modernize Portugal and prevent it from falling behind other western European nations. His expansive construction, urbanization, infrastructure, and redevelopment benefited greatly from the meticulous maps and surveys, as here, completed in the early days of the Regeneração. Ultimately, Melo's expensive construction projects did not yield the fast economic growth he predicted and instead drove Portugal into a financial ruin by the last decade of the century.

The limits of this plan were set out in the royal ordinance that established the work to be carried out:

all the land included in the bypass line, and what exists up to 200 meters beyond it: as well as the banks of the Tagus to the east as far as Beato Antonio, and westward to the church of the Jeronymos in Belém, with the land adjacent to them for an equal distance (Ordinance of 2 November 1853).

The survey for this map was completed between 1856 and 1858 under the direction of Filipe Folque and the Trabalhos Geodésicos e Topográficos do Reino. The day-to-day survey work was outsourced to three private firms, headed by Carlos Pezarat, Francisco Goullard and César Goullard, respectively. After three years of work, the engineers produced an enormous survey consisting of some 64 water color manuscript sheets at an astounding 1:1000 scale. As far as we can tell, the map was not committed to print until 1778 (as here), with a second edition following in 1884. This remained the premier plan Lisbon until superseded by a new plan in 1911.

It is, without a doubt, a work of great value, not only for what it represents in terms of the careful and laborious triangulation, but also for the survey and design of its base sheets, which allowed the publication of the Topographic Map of Lisbon at a scale of 1:5000. It was the first published with contour lines and whose stone matrix can serve as a model, due to the purity of the trace, the delineation of the streets, the configuration of the buildings and the wavy waters, as well as for what it contains as a valuable documentary, showing the topography of Lisbon at the time immediately prior to the transformations that the city underwent in its first plan of major urbanization. The Topographic Chart of Lisbon, on the scale of 1/5000, as a lithograph, can be considered as one of the most famous, once again demonstrating the merits of Portuguese artists.

This map was surveyed between 1856 and 1858 by Carlos Pezarat, Francisco Goullard and César Goullard under the guidance of Felipe Folque. The resultant plan was not reduced and issued as a single comprehensive map until this, the first edition, issued in 1878. A second edition followed in 1884. No engraver is names, and the plates were subsequently lost. Extremely scarce to the market and in institutional collections. Even the Museu de Lisboa has only the 1884, not the present 1878 first edition.

Filipe de Sousa Folque (November 28, 1800 - Decemer 27, 1874) was a Portuguese aristocrat, politician, civil and military engineer, and mathematician active in the middle to late 19th century. Folque was born in Portalegre, the son of son of Pedro Fulque (1744 - 1848), also a military engineer. He studied mathematics at the University of Coimbra, graduating in 1826. In 1833, he joined the Portuguese navy, transferring to the army shortly after to become Lieutenant of Engineers. From 1836 he became director of the Academia de Marinha. In that year he created a hydrographic engineer curriculum that significantly advance exposure of naval officers to astronomy, geodesy, topography, hydrography, and cartography. In 1840, he was appointed professor of astronomy and geodesy at the Escola Politécnica de Lisboa. In 1843, Folque, along with his father, were chosen by Maria II to revolutionize the mapping of Portugal as head of a new national topogrpahical survey (1:100000). In 1851, he took over the direction of a new hydrographic department, which for a long time depended on the Direcção Geral dos Trabalhos Geodésicos. As a member of the Academia Real das Ciências, he tough mathematics to the daughters of Queen Maria II (1819 - 1853). Folque was also appointed to head a new meticulous survey of Lisbon in 1856. For his services, Folque was offered a noble title, which he refused so that it could be passed to his son-in -law, who was named Conde de Nova Goa. He died at the age of 74 in Lapa (Lisbon) Learn More...

Very good. Left sheet is in fine condition. Right sheet exhibits two large well-repaired tears, one extending from the left margin about 25% into the page. A second, larger but near invisible, tear from the right border extends approximately 3/4 across the page. While the repairs are evident on the verso, they are remarkably stable and do not significantly detract from either the visual or physical integrity of the piece. Partial margin reinstatement upper left corner - minimal impact on printed area.