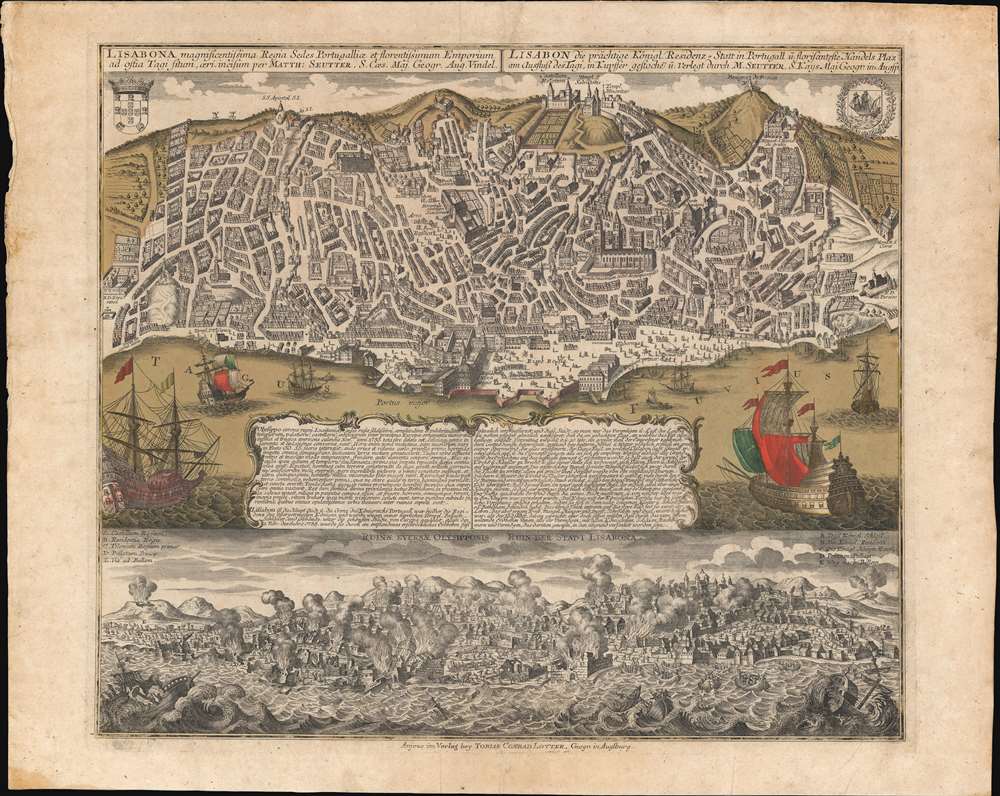 The 1755 Great Earthquake of Lisbon.

An extraordinary 1756 Seutter / Lotter map and view of Lisbon, Portugal, in the wake of its near total destruction by the Great Lisbon Earthquake of 1755. The map is divided into two sections. The upper section features a view and map of Lisbon as it appeared in 1735, 20 years prior. The lower section, entitled 'Ruinae Eversae Olysipponis' is a dramatic bird's eye view of Lisbon being consumed by the Great Earthquake and related fires.

The upper view and map is drawn from the c. 1596 Braun and Hogenberg view, with considerable updates to make it consistent with the state of the city in 1735. The view looks northeasterly on Lisbon, with the busy harbor and Lower Town of Baixa in the foreground. In the background the Castelo de São Jorge, an old Moorish redoubt, overlooks the city. At center the impressive Romanesque and Gothic cathedral Se Patriarcal is recognizable. Texts in Latin and German below the view describe the earthquake and the horrors that followed.Great Lisbon EarthquakeIn 1755, Lisbon was at the height of its Golden Age. Portuguese ships sailed from Lisbon to all parts of the world to its colonies in Brazil, or to Macao, India, and Africa. Monarchs lavished wealth on their capital, making it a city of soaring cathedrals and palaces. The Portuguese Golden Age came crashing to an end on November 1, 1755, when a massive earthquake (est. 7.7 on the Richter Scale) devastated Lisbon. Fleeing collapsing buildings, the populace fled to open spaces, only to watch the sea recede, destroying all ships and cargo in the harbor. Forty minutes later, three massive tsunamis crashed into the already devastated city. As November 1 was All Saints Day, devotional candles throughout the city were toppled, leading to a firestorm of such magnitude that it asphyxiated people up to 30 meters from the flames.

In the end, 85% of the city was in ruins and some 40,000 people (of the city's 200,000) died. The famed palaces and libraries were destroyed, including the Royal Archives, which housed hundreds of priceless paintings by the great masters of Europe. Also, lost and of note to us, were all the records of early Portuguese navigation, including those of Vasco de Gama, Pedro Álvares Cabra, and Bartolomeu Dias.

In an instant, the thriving Portuguese economy collapsed. Having struck on a religious holiday, many staunch Catholics believe the quake to be Divine wrath. The earthquake also had a wide-ranging impact on philosophy and literature throughout Europe. It was used by some to argue against the notion of a benevolent deity. Politically, the aftermath precipitated a consolidation of power in the hands of the king and the fall of many of Portugal's long-standing noble families.

This view was engraved in the Lotter / Seutter workshops of Augsburg. It is undated, but most carto-historians date it to about 1756, one year after the earthquake. It was issued both separately and in Lotter atlases. The view is reasonably well represented institutionally, present in perhaps 25 collections, but is scarce on the market.


Tobias Conrad Lotter (1717 - 1777) was a German engraver and map publisher. Lotter was the son of a baker and city guardsman, but married Euphrosina (1709 - 1784) Seutter, elder daughter of the prominent map publisher Matthäus Seutter. He began working at his is father-in-law's map business about 1740. Between 1740 and 1744 he produced, under Seutter's imprint, the Atlas minor, Praecipua orbis terrarum imperia, regna et provincias, Germania potissimum tabelli. Upon Seutter's death, in 1757, the firm's stock was taken over by his son, Albrecht Karl Seutter (1722 - 1762), who himself died in 1762, just a few years later. The remaining Seutter map plates were subsequently divided between Lotter and the publisher Johan Mitchell Probst (1727 - 1776). With the support of his sons, Matthäus Albrecht (1741 - 1810), Georg Friedrich (1744 - 1801) and Gustav Conrad (1746-1776), Tobias Conrad Lotter succeeded in building on the economic success and professional reputation of his father-in-law. In time, Lotter became one of the most prominent mid-18th century map publishers working in the German school. After Lotter's death in 1777, the business was taken over by his two eldest sons, who, lacking their father's business acumen, presided over the firm's slow decline. It was nonetheless passed on to a subsequent generation of Lotters, Matthäus Albrecht Lotter's sons, Gabriel (1776 - 1857) and Georg Friedrich (1787 - 1864), who pushed it into further decline until it faded out in the early-19th century. Learn More...