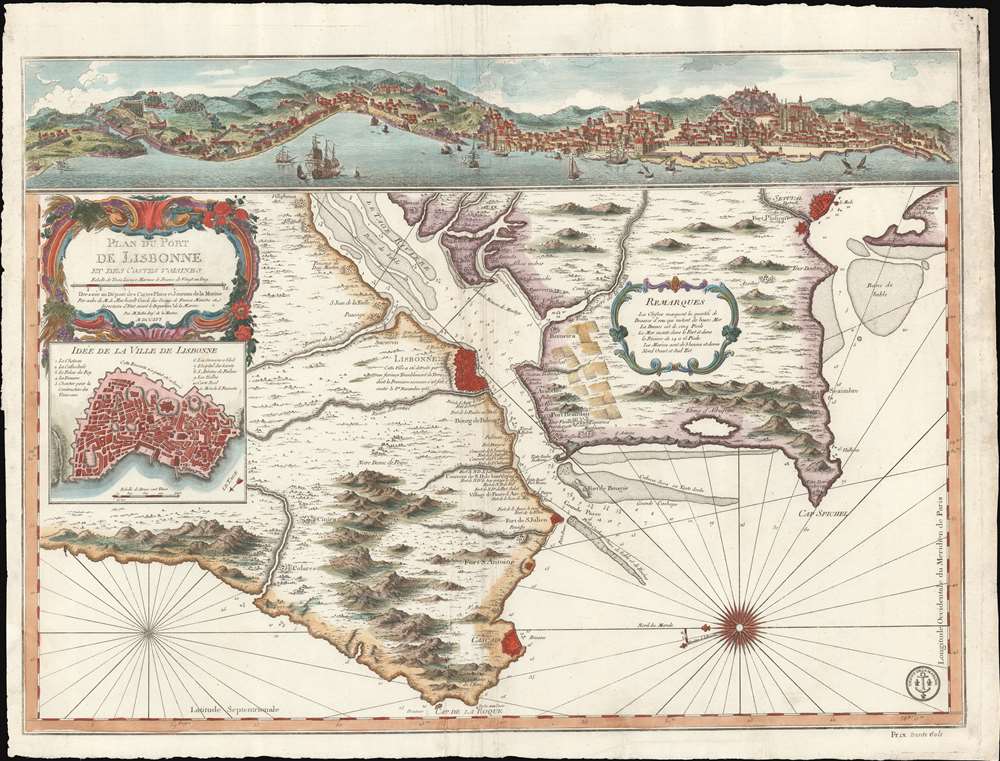 The new reality in the wake of the 1755 Earthquake.

A scarce 1756 J. N. Bellin nautical map of Lisbon, reflecting the aftermath of the disastrous 1755 mega-earthquake that all but destroyed golden-age Lisbon and the surrounding lands. Oriented to the East - as a ship world approach the Tage - the map depicts the city of Lisbon and entrances to the port on both sides of the Tage River, extending south to Setuval and north beyond Colares. A dramatic view of Lisbon as it would have appeared just before the earthquake surmounts the map. An inset near the rococo title cartouche details the walled city of Lisbon - as it appeared before the quake, but as this is primarily a nautical chart, such would not have affected navigation.

In 1755, Lisbon was at the height of its Golden Age. Portuguese ships sailed from Lisbon to all parts of the world: to its colonies in Brazil, or to Macao, India, and Africa. Monarchs lavished wealth on their capital, making it a city of soaring cathedrals and palaces. Then, the Portuguese Golden Age came crashing to an end on November 1, 1755, when a massive earthquake (est. 7.7 on the Richter Scale) devastated Lisbon. Fleeing collapsing buildings, the populace fled to open spaces, only to watch the sea recede, destroying all ships and cargo in the harbor. Forty minutes later, three massive tsunamis crashed into the already devastated city. As November 1 was All Saints Day, devotional candles throughout the city were toppled, leading to a firestorm of such magnitude that it asphyxiated people up to 30 meters from the flames.

In the end, 85% of the city was in ruins and some 40,000 people (of the city's 200,000) died. The famed palaces and libraries were destroyed, including the Royal Archives, which housed hundreds of priceless paintings by the great masters of Europe. Also lost, and of note to us, were all the records of early Portuguese navigation, including those of Vasco de Gama, Pedro Álvares Cabra, and Bartolomeu Dias.

In an instant, the thriving Portuguese economy collapsed. Having struck on a religious holiday, many staunch Catholics believed the quake to be Divine wrath. The earthquake also had a wide-ranging impact on philosophy and literature throughout Europe. It was used by some to argue against the notion of a benevolent deity. Politically, the aftermath precipitated a consolidation of power in the hands of the king and the fall of many of Portugal's long-standing noble families.

This map was compiled by Jacques Nicholas Bellin and published in Paris by the French Dépôt des Cartes et Plans de la Marine. It was first issued, as here in 1756, one year after the 1755 Great Lisbon Earthquake redefined regional geography. The map is scarce. The OCLC has multiple entries for this map, but these can be distilled into just 4 cataloged examples: the British Library, the University of Chicago, the Biblioteca Nacional de España, and the Bibliothèque Nationale de France. It appears only rarely on the market.