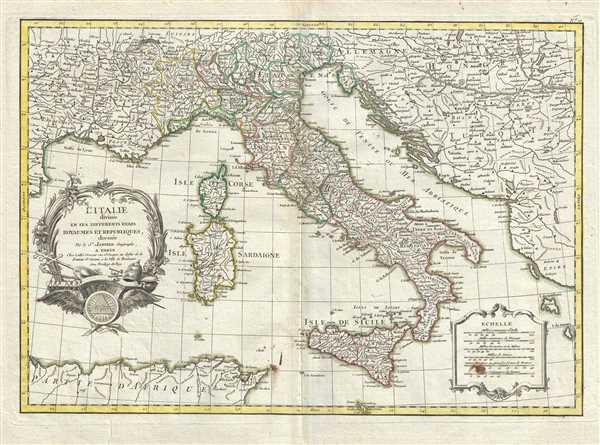 Map depicting Italy before its unification.

A beautiful example of Le Sieur Janvier's c.1778 decorative map of Italy. Covers from the Gulf of Eyon eastward to include all of Corsica, Sardinia, Italy, the Adriatic, and parts of Hungary and Turkey in Europe. Extends south to include adjacent parts of Africa and north as far as Lake Geneva. An elaborate title cartouche rendered with Papal accoutrements appears in the lower left hand quadrant. A secondary cartouche bearing a six distance scales appears in the lower right.

Overall, a fine map of the region. Drawn J. Janvier for issue as plate nos. 10 in Jean Lattre's Atlas Moderne.

Very good. Some toning and wear along original centerfold. Minor foxing. Minor stains over lower half of the map. Original platemark visible.