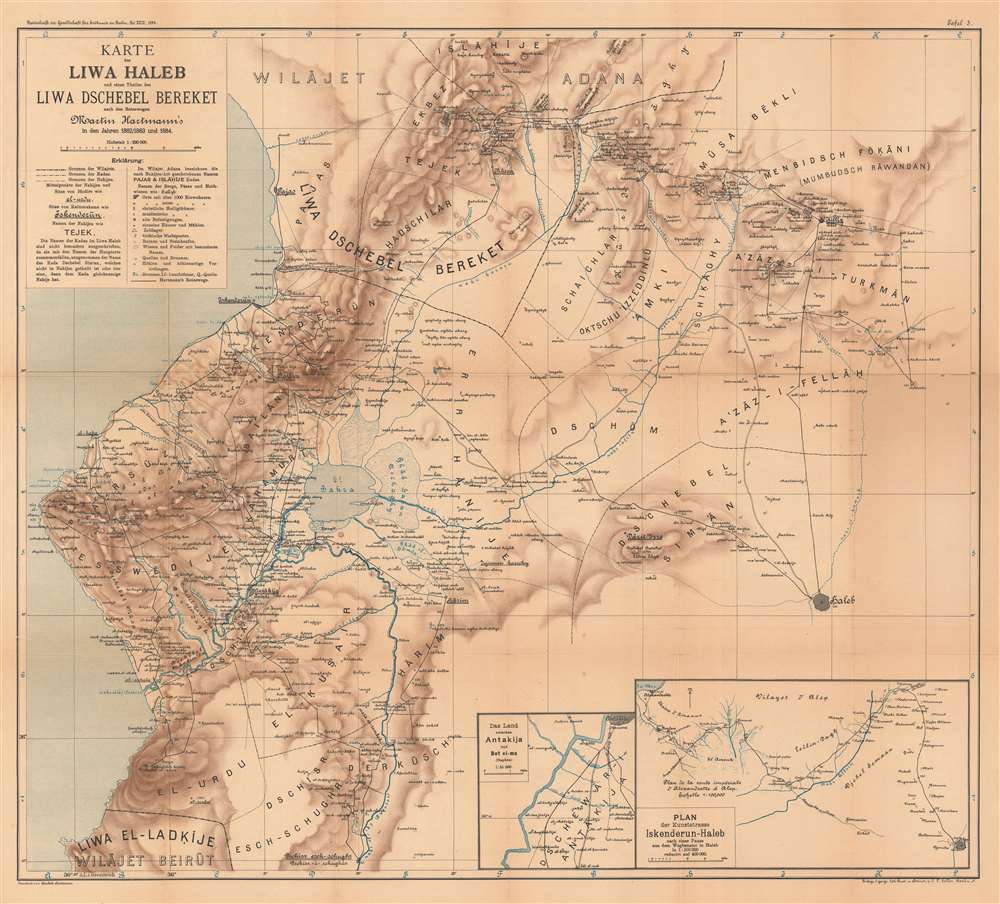 One of the first scientific maps of northern Syria and southern Turkey.
$450.00

This is an 1894 Hartmann map of the eastern part of the Vilayet of Aleppo (Haleb), former Ottoman Empire, which encompasses parts of modern-day Turkey and Syria. The map depicts from the southern extreme of the Vilayet of Adana south to Aleppo (now in Syria) and the border of the Vilayet of Beirut. Cities and towns are labeled throughout, including Iskenderun, Pajas, Aleppo (labeled here as Haleb), and Antakija. (As an aside, Iskenderun was known as Alexandretta from the Middle Ages until the Ottoman conquest of Syria and was made famous by Indiana Jones and the Last Crusade. Hartmann, in his article, refers to the city as Alexandrette.) Insets in the lower right corner focus on the city of Antakija and the route between Iskenderun and Aleppo, respectively.

Martin Hartmann and his expeditions to northern Syria

Martin Hartmann (1851 - 1918) was a German Arabist and Islamic scholar. Hartmann studied oriental languages at university in Leipzig, earning a doctorate in 1875. After graduating, he elected to avoid the life of an academic and instead went to Constantinople, where he studied to become a Dragoman, a translator, interpreter, and official guide for European consuls, embassies, and other officials in the former Ottoman Empire. A dragoman was required to speak Turkish, Persian, and Arabic. Hartmann was named Dragoman and Chancellor of the German Consul General in Beirut in 1876 and held the post until 1887. It was in this capacity that he ventured into northern Syria in 1882, 1883, and 1884, stating that northern Syria was relatively unexplored at the time. These explorations were sponsored by the Karl Ritter Stiftung der Gesellschaft für Erdkunde, part of the Gesellschaft für Erdkunde zu Berlin (Berlin Geographical Society). Hartmann's goal was to create a comprehensive map of the region - the present offering - complete with the local names of the villages and geographical features.

This map was drawn by Elisabeth Hartmann (Martin Hartmann's wife), engraved by C.L. Keller, and published in the Zeitschrift der Gesellschaft für Erdkunde zu Berlin in 1894. Two examples are cataloged in OCLC and are part of the institutional collections at the Staatsbibliothek zu Berlin and the Bayerische Staatsbibliothek in Munich.