1853 Meyer Map or Plan of London and its Environs 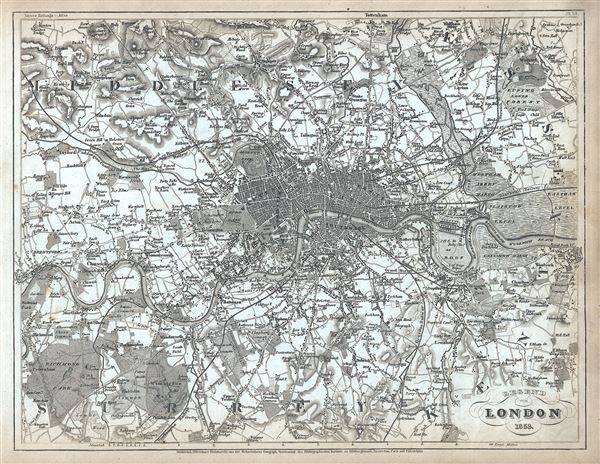 1853 Meyer Map or Plan of London and its Environs

This is a beautiful map or plan of London, England and its vicinity by Joseph Meyer. It covers the city of London and includes parts of Kent, Middlesex, Essex and Surrey. Extends north to Tottenham, south to Beckenham Place, east to Wall End and west to Richmond. The world's largest city from 1831 to 1925, London is beautifully detailed to the level of individual buildings, canals and roads. Includes topographical details as well as farms, parks, river ways, and swamps.

This map was issued as plate no. 52 in Meyer's Zeitung Atlas. Although all the maps in this atlas are not individually dated, the title page and maps were often updated while the imprint with the date was not, causing confusion to the exact date for some of the maps. Moreover some maps in the atlas were taped in at a later date as an update to the atlas. We have dated the maps in this collection to the best of our ability.