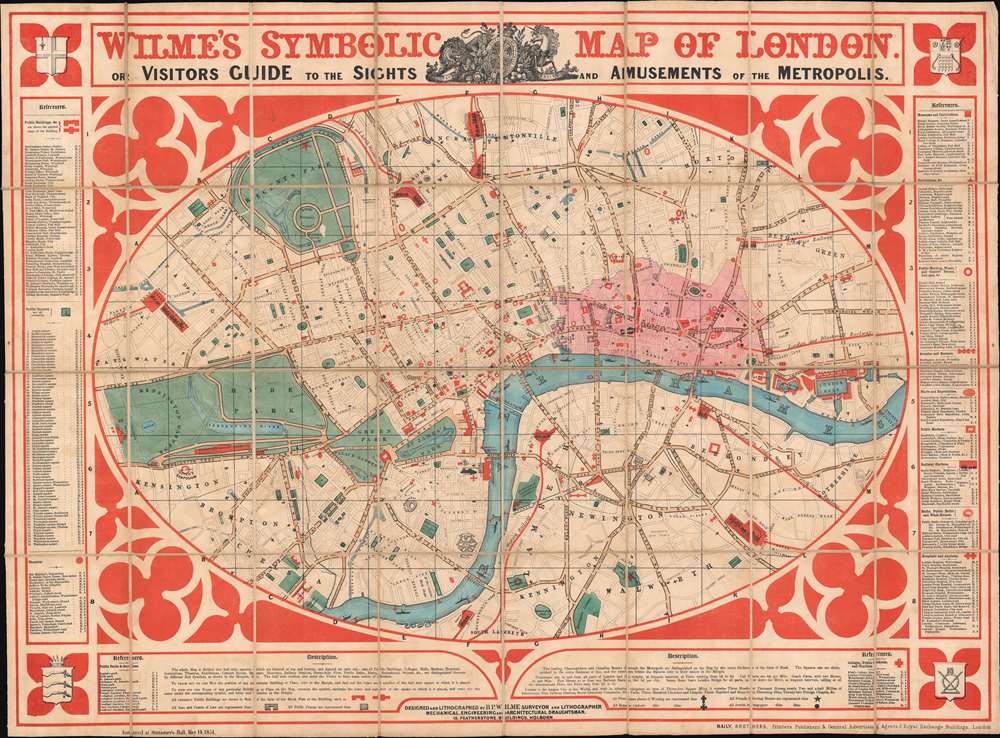 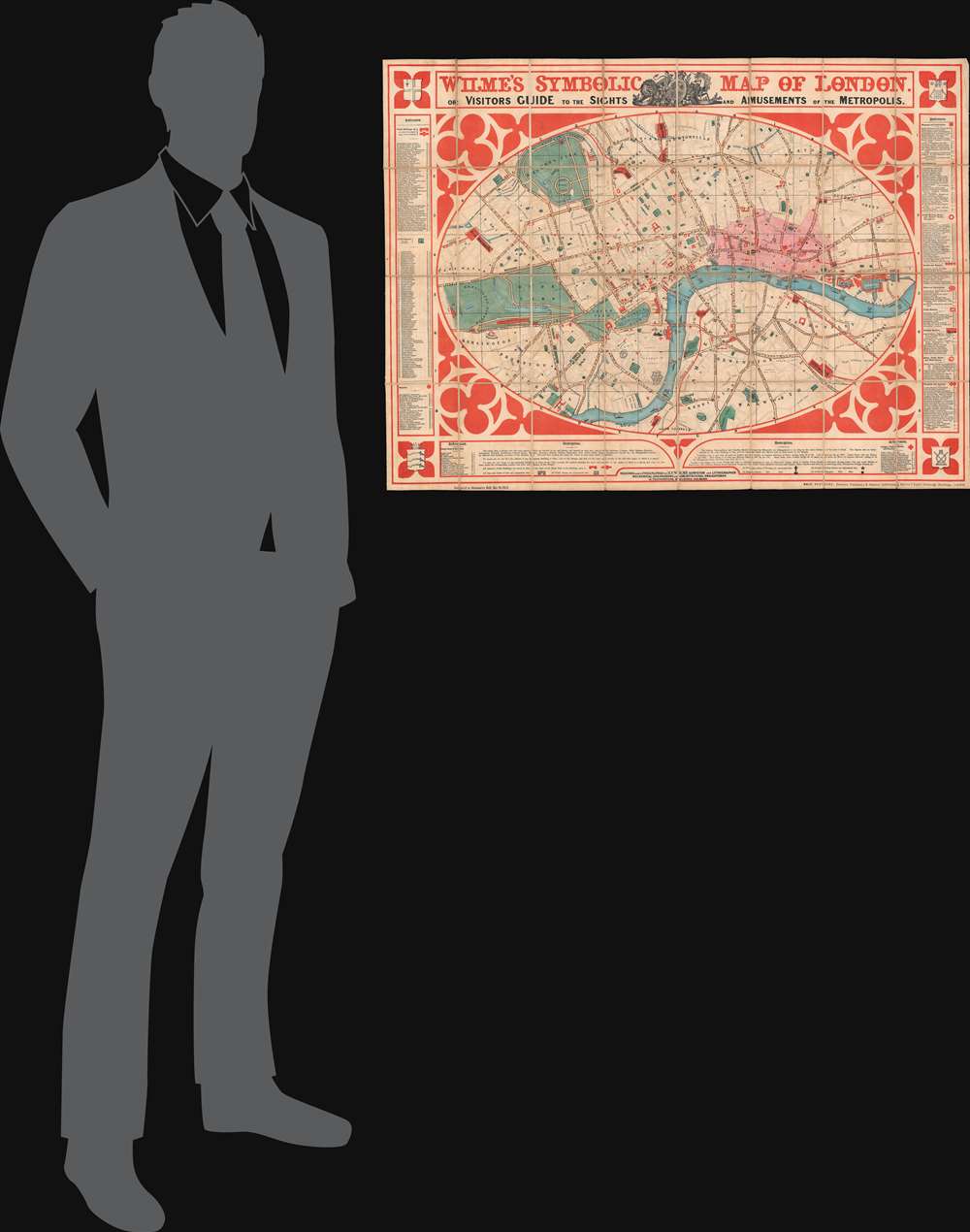 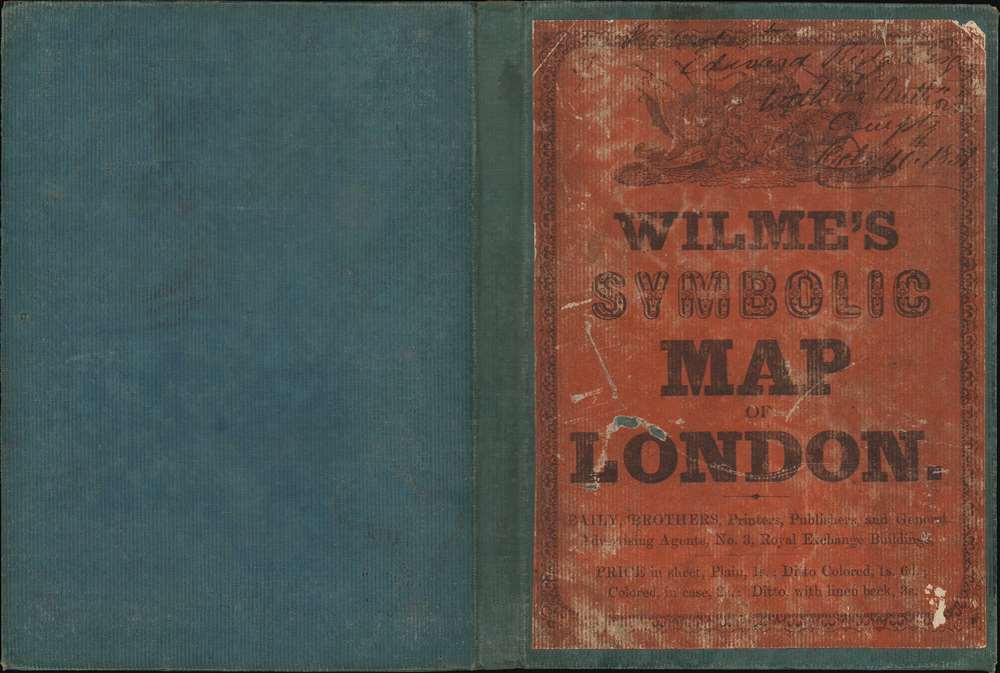 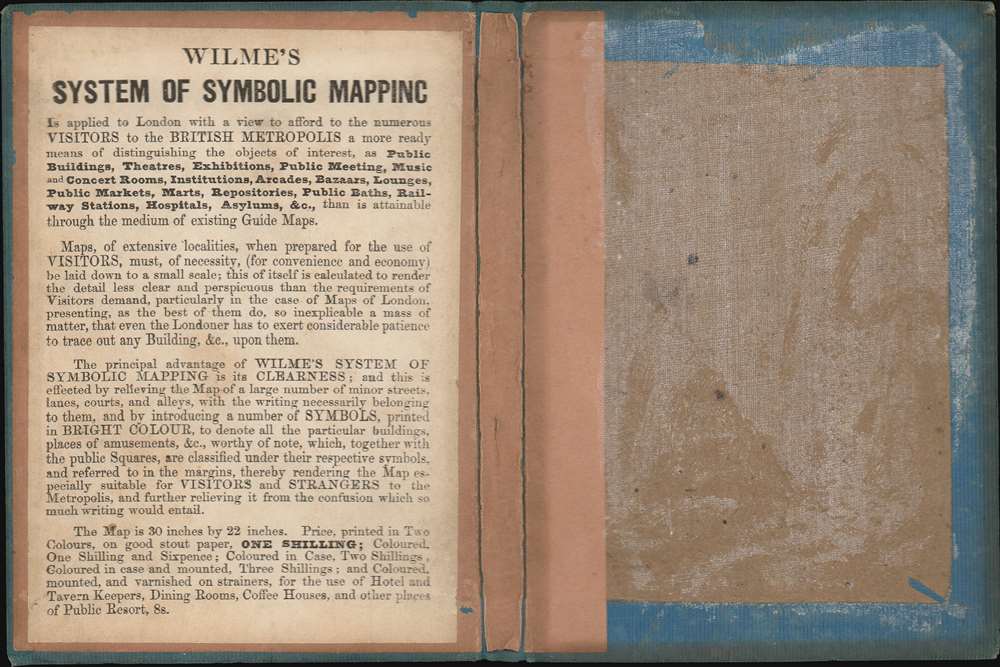 A striking colorful 1851 Benjamin Pickever Wilme tourist map of London that stands out in stark contrast to contemporaneous maps for its clarity and utility. Wilme employs a novel system of symbology and reduction to create a practical easy-to-understand tourist guide map. Coverage extends from Pentonville in the north to South Lambeth and from Bayswater in the east to Bermondsey in the west. Bears an old ownership stamp for 'J. W. Fordham'.

The map employs the self-styled 'Wilme' system, common place to the modern eye, but revolutionary in its time. Wilme simplified the map of London by subtracting detail in minor streets and alleys, while at the same time emphasizing major arteries. He further introduces a symbol system wherein the 'Lions of London', that is points of interest, are identified by icons tied to a reference index in the margins. The whole is an easy-to-use practical guide to London perfect for the touristic visitor. Moreover, it is charmingly presented with bright colors and vignette illustrations highlighting railroad connections, ferries, and other points of interest.

This map was designed by Benjamin Pickever Wilme and issued in 1851 by Baily Brothers. We note just one example in OCLC, located at the Bibliothèque Nationale Universitaire de Strasbourg. Exceedingly scarce to the market.

Benjamin Pickever Wilme (c. 1800 - May 8, 1862) was a civil engineer, draughtsman, and surveyor active in London in the mid-19th century. Wilme was most likely born in Ireland, where he married and lived until about 1850, when he resettled in London. He appeared is the 1850 London Directory as a Civil Engineer. He published a handbook on 'Plain and Ornamental Mapping' in 1846. Learn More...


A. H. Baily (fl. 1838 - 1883) was a London printer, engraver, stationer, and publisher active in the mid to late 19th century. The firm alternatively operated as A. H. Bailey and Company, A. H. and C. E. Baily, Baily Brothers, and Messrs Baily. The firm was best known for decorative sporting prints and portraits of political figures. Learn More...