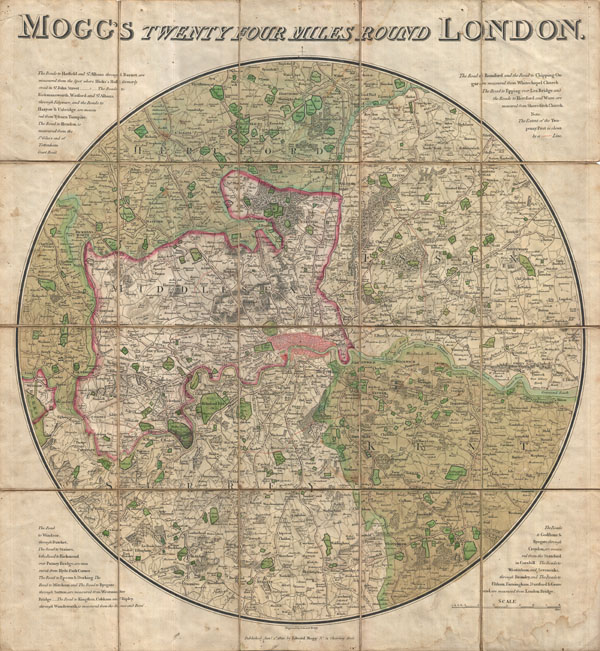 Edward Mogg's extraordinary 1820 case map of the region 24 miles around London, England. Covers from Ryegate in the south to Hertfort in the north, and from Windsor in the west to Gravesend in the east. Mogg first issued this revolutionary circular format map in 1805 and published 11 subsequent editions, the last being 1860. This example represents the sixth state, 1820, in which Waterloo Road first appears. This road was named in honor of the 1815 British victory at the Battle of Waterloo, which effectively ended the Napoleonic Wars. Mogg offers fine engraving and extraordinary detail throughout, naming towns, cities, forests, parks, scrublands, and various important buildings. Published and engraved by Edward Mogg from his offices at No. 51 Charing Cross, London.

Edward Mogg (fl. 1803 - 1860) was an English cartographer and engraver active in London during the first half of the 19th century. Unlike many cartographers of the period, Mogg personally engraved all of his own maps in a fine detail oriented hand. Mogg built his business on the production of guides, railway maps, and other publications focused on tourists and travelers in London. Mogg seems to have had a passion for defending tourist against the depredations of dishonest taxi cab drivers and was the first to introduced the innovative "Cab Fare Map and Guide". Mogg also published the 1822 edition of Paterson's Roads of England and Wales and a fascinating celestial sphere for school children.