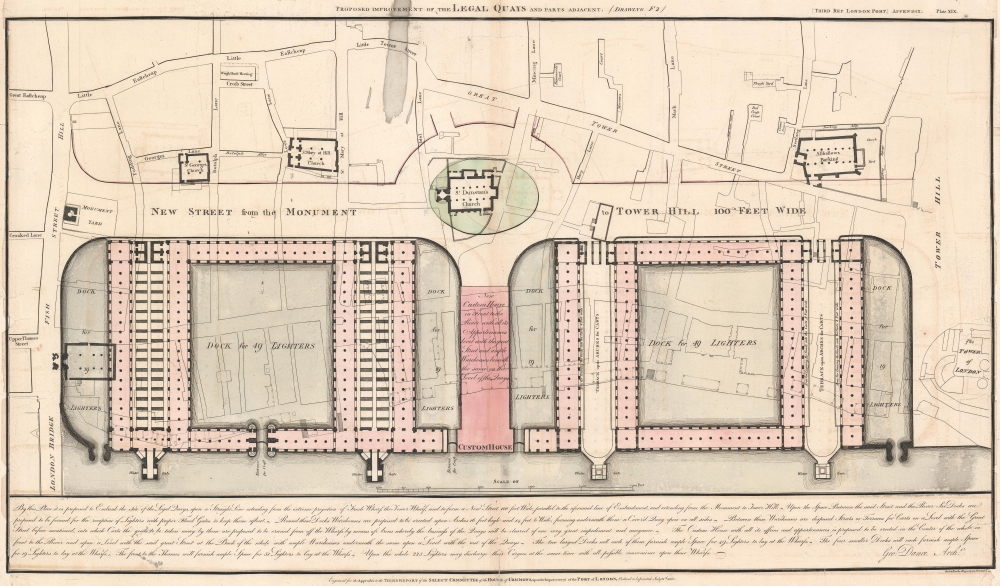 Very scarce plan for the improvement of the Legal Quays between the Tower of London and London Bridge.
$1,000.00

This is an extremely uncommon 1800 George Dance plan or map of the Legal Quays, City of London. Created by Dance to illustrate his proposed plan for the improvement of the Legal Quays, the map depicts roughly from London Bridge and Fish Hill Street to the Tower of London and from the Thames River to Great Tower Street and Little Tower Street. The surrounding London Street layout is included, showing all streets and identifying major buildings. A darker, overprinted section indicates where the improvements are intended.

The Proposed Improvement of London's Docks

Around 1796 the House of Commons recognized that the current docks available in London were insufficient to meet the needs of increased trade. A call was put out to architects and city planners, many of whom submitted prospectives - the present example by George Dance being one such. Dance at this time was near the end of a long and prosperous architecture career that included the façade of London's Guildhall. This revamping of London's Docks, had it been adopted and constructed, would have been the crowning glory of his career. Instead, this construction was never completed and only this grand vision remains.

This map was engraved by Gale and Butler of Crooked Lane, London, for the Appendix to the Third Report of the Select Committee of the House of Commons upon the Improvement of the Port of London.

George Dance the Younger, (April 1, 1741 - January 14, 1825) was an English architect, surveyor and portraitist. Dance was born at his family home on Chiswell Street, London. He was the fifth son of a well-established architect and educated to follow in the family tradition. He studied at the St. Pauls School before departing on the Grand Tour and eventually spending six years studying architecture and draughtsmanship in Rome. He won several architecture awards in Italy and received his first commission there, to design two chimney pieces for Sir Robert Mainwaring. Dance returned to London and joined his father's architecture practice in 1765. In the same year his design was chosen to rebuild the All Hallows-on-the-Wall Church, Dance's first major project in London. He went on to complete numerous major constructions including the Royal College of Surgeons, Newgate Prison, St Luke's Hospital for Lunatics, and the Shakespeare Gallery in Pall Mall. Unfortunately most of these have been demolished. His most significant surviving work is the façade of London's Guildhall. In December of 1768 Dance was one of the Royal Academicians, founders of the Royal Academy. Dance largely retired in 1798 when he became a professor of architecture at the Royal Academy. Around this time he dedicated himself instead to portraiture to the extent that he did not deliver a single lecture at the academy. He was dismissed in 1805. Dance died at his home on 92 Grower Street, London, a site now marked with a plaque. His physical remains were interred at St. Paul's Cathedral. Learn More...

Appendix to the Third Report of the Select Committee of the House of Commons upon the Improvement of the Port of London. (London) 1800.