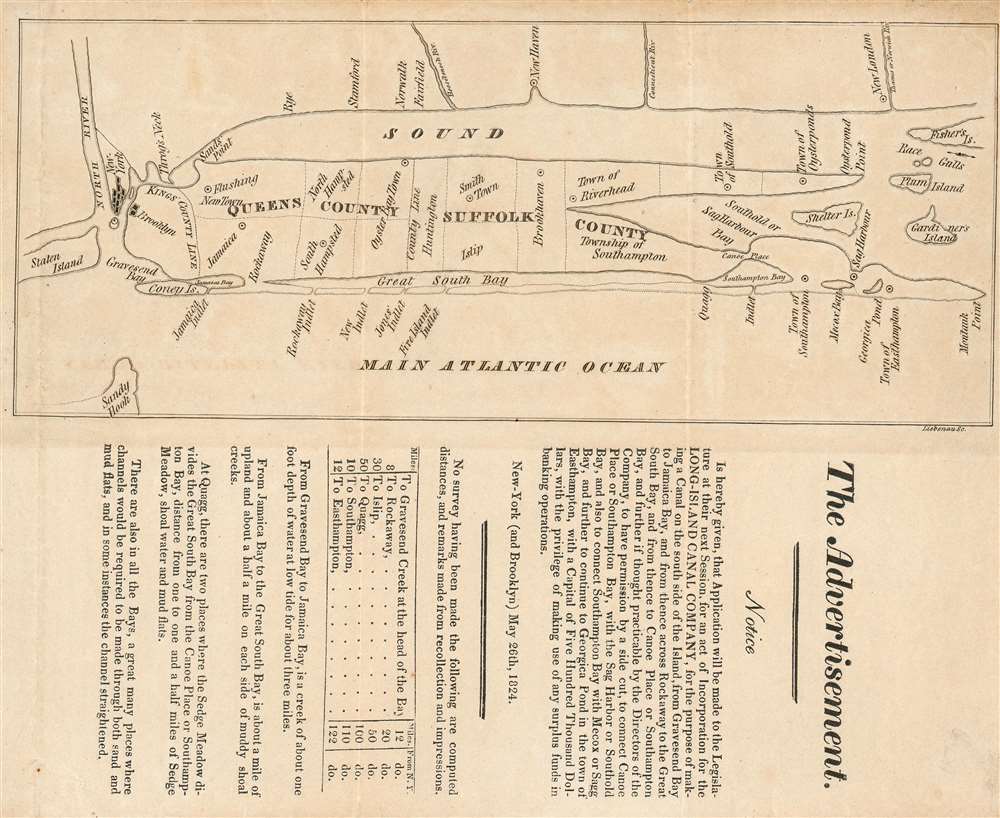 This is an 1824 map of Long Island, the earliest separate map we have identified of Long Island printed in the United States. The map was drawn with accompanying text to promote the construction of a new canal in southern Long Island - an effort that would presumable have significantly increased trade communication between southeastern Long Island and New York City, and from there, the world. It shows the cities of New York and Brooklyn pictorially; the Long Island towns of Flushing, Jamaica, Hampsted, Oyster Bay, Smithtown Brookhaven, Riverhead, Southold, Oysterponds, Southhampton, and Easthampton are marked on the map. In Connecticut, Rye, Stamford, Norwalk, Fairfield, New Haven and New London are named. The map is schematic in the extreme, with its best detail shown along the southern shore of the island - detailing the inlets along the barrier islands from Coney Island, Rockaway and Fire Island, and the waterways just inland.

The map is appended to a formal announcement of the application to the New York State Legislature for the incorporation of the Long Island Canal Company,

The text goes on to enumerate relevant distances, and describe the coastal conditions of the relevant areas. While there is documentary evidence that the company was indeed incorporated in 1828, there is no similar evidence that any of the company’s aims were ever achieved, or indeed even embarked upon. A significantly more modest canal connecting the Great Peconic Bay with Shinnecock Bay (Southhold Bay and Southampton Bay on the map, respectively) was eventually constructed in 1892.

We should like to praise the creator of so early an American publication, but the historical record is remarkably opaque with regard to the Liebenau whose imprint appears on the map. The 1827 and 1829 editions Thomas Longworth’s American Almanac identifies an engraver Frederick Liebenau at 42 Vesey Street in New York, which is very likely our man, but no other work appears to be credited to him.

There are no examples of this 1824 map in OCLC, and this is the only example we have seen on the market or catalogue records. The map was also included in an 1826 pamphlet prepared for the Legislature, which is also rare: it appears in only four institutions in OCLC.

Good condition. Some wear at edges and corners.
Looking for a high-resolution scan of this?