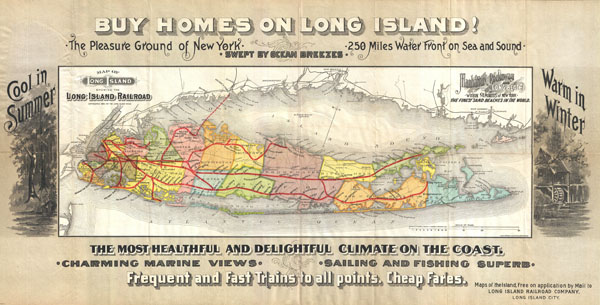 This highly appealing decorative map of Long Island was issued in 1891 by the Long Island Railroad to promote real estate investment throughout the island. Cartographically the map is based upon Colton's 1855 Travellers Map of Long Island, though it has been updated to 1884, reflecting the development of the rail lines as far as Sag Harbor and Greenport as well as embellished with numerous decorative elements. By far this map's most interesting feature is its elaborate decorative border work which promotes the beaches, climate, views, fishing, and sailing to be hand throughout Long Island. The map describes Long Island, 'the Pleasure Ground of New York,' as 'Cool in the Summer,' 'Warm in the Winter,' 'swept by ocean breezes,' and the 'most healthful and delightful climate on the coast.'

The Long Island Railroad (1834 - present) is a commuter railroad servicing New York City and Long Island. Established in 1834, the LIRR, as it is commonly known, is the nation's oldest continuously operating railroad. The LIRR was initially chartered with the intention of providing service between New York and Boston via a ferry crossing at its easternmost terminus, Greenport. With the establishment of the New Haven - Hartford Railroad in 1849 the LIRR was forced to refocus its attention on the development rail transit in Long Island itself. Despite its best efforts the Long Island Railroad was unable to turn a profit until the company was acquired by the Pennsylvania Railroad in 1900. The Pennsylvania Rail road extended the LIRR from Long Island City into Manhattan by 1910, when it completed the innovative Penn Station at 34th Street. With direct rail access to midtown Manhattan, Long Island became a practical alternative to the rising congestion and crime evident in the rapidly industrializing New York City. Since then the LIRR has grown to become the nation's busiest railroad serving nearly 83 million passengers annually. Learn More...

Very good condition. Original folds exhibit some wear, especially at fold intersections, and light verso repairs.
Looking for a high-resolution scan of this?