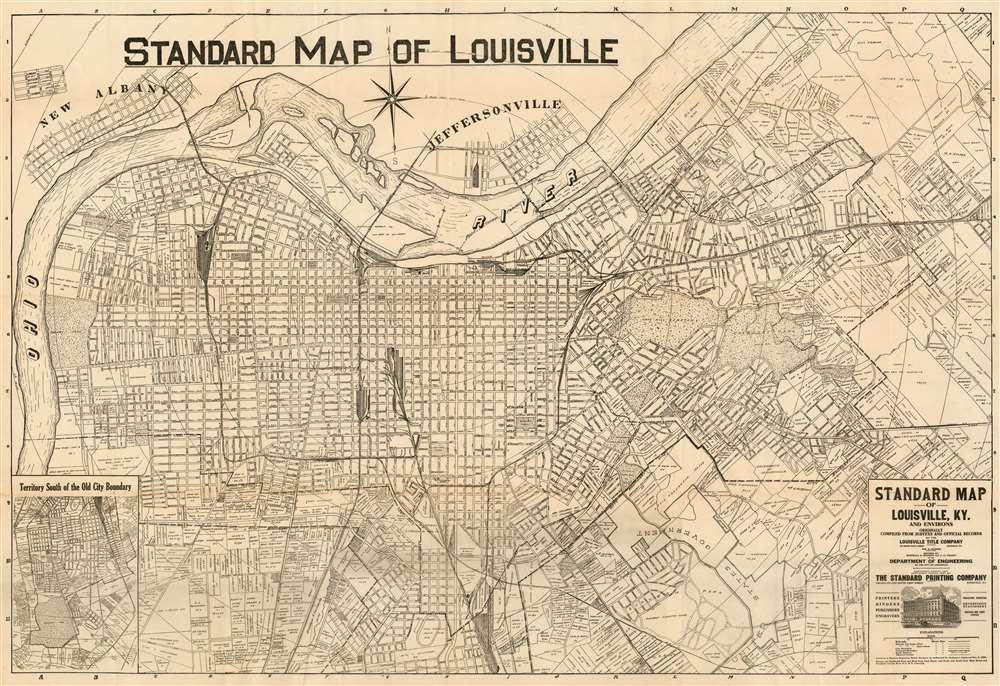 This is the 1921 edition of William Bridges Hunter’s map of Louisville, Kentucky. This plan, printed in Louisville by the Standard Printing Company, is one of the most detailed early maps of the city we have encountered, far outstripping the atlas maps available from the 19th century and rivaled only by the Mendenhall map of 1906.

Features on the Map

The map uses concentric circles to show the distance, in half-mile increments, from the Louisville courthouse. Streets and important municipal buildings are named on the map itself - including the New Louisville Jockey Club (Chuchill Downs would not be officially incorporated until 1937.) Railways and rail yards are shown in detail, right down to lots with sidings. Central Station is marked. The 14th Street Bridge, the K and I Bridge, and the Big Four bridges are shown spanning the Ohio River. Landowners of many lots are named on the map, in particular those that appear to be open for sale and development. Parks and cemeteries are marked and named as well.

The margins are marked with letter and number coordinates to facilitate the location of streets and points of interest listed in the 16-page guide (separate but present.) The guide also contains a detail map of the Louisville business district, which has its own two-page index. Hunter's map was derived from insurance surveys and maps executed for the Louisville Title Company by William Bridges Hunter. Although the first iteration of the survey was published in 1907, the map was regularly updated - this 1921 edition includes data not present even on the 1917 issue.

The map is rare. We see no examples in price and auction records, and no other examples of any edition appear on the market. One example each of the 1917, 1921 and 1928 editions appear in OCLC; two examples of the 1936 appear. This edition, the 1921, is held only by the Hagley Museum and Library in Wilmington.

William Bridges Hunter (February 19,1883 - August 25, 1966) was an American insurance man and erstwhile draughtsman. From 1901 to 1954 he was an employee of the Louisville Title Insurance Co., starting as an office boy and rising to become, in 1938, president of the company. In 1954 he became Chairman of the Board of Directors, and held that position until his death. He appears to have worn many hats on his way up through the business: his 1918 draft registration has his profession listed as ‘vault keeper.’ He was instrumental in compiling drawing the 1907 ‘Louisville Title Co.’s revised map of Louisville, Ky. and environs, and he was credited for having developed the first complete set of property maps for Jefferson County. Hunter appears to have been an athletic youth, competing in the men’s 60 Meters in the 1904 Summer Olympics. Will Hunter ran the 60 metres at the 1904 St. Louis Olympics. Though he did not (as his obituarist claimed) take an Olympic gold, he did also compete in non-Olympic meets and events during the 1904 Louisiana Purchase Exposition. At the YMCA Championship meet, Hunter won the long jump and finished third in the 100 and 220 yds. Learn More...