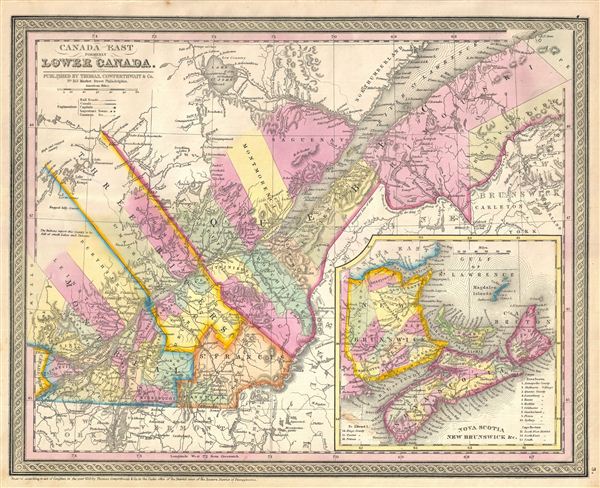 A fine example of S. A. Mitchell's important 1854 map of Lower Canada or Quebec, Canada. Centered on the St. Lawrence River Valley, this map covers from Montreal to the mouth of the St. Lawrence, north as far as Lake St. John and south to the United States border. In the lower right quadrant, a large inset details the Maritime Provinces of New Brunswick, Nova Scotia, Cape Breton and Prince Edward Island. The whole is engraved and colored in Mitchell's distinctive style with green border work and vivid pastels. Political and topographical features are noted and color coded with elevation rendered by hachure.

With the signing of the 1854 Treaty of Reciprocity between the United States and Canada, this area experienced a period of sustained growth and prosperity. The increased international trade that flowed into Quebec via the Hudson Valley inspired popular interest in the region. Montreal, Three Rivers, and St. Francis in particular benefited from the cross-border trade.