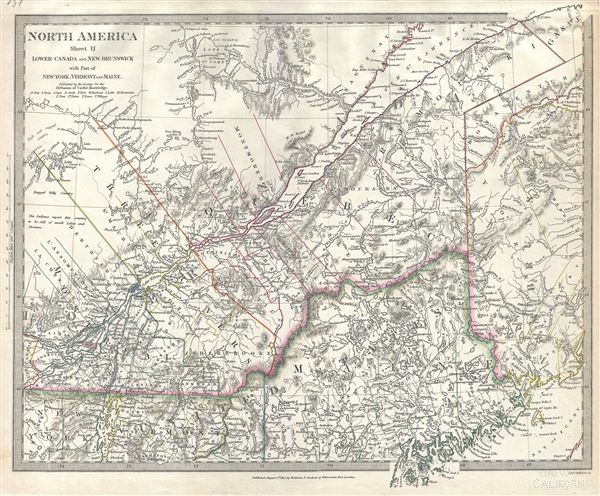 A beautiful 1832 map of Lower Canada with parts of Maine and New Brunswick by the Society for the Diffusion of Useful Knowledge or S.D.U.K. Centered on the St. Lawrence River, it covers part of Quebec or Lower Canada from Vaudreuil to the Chaleur Bay and south as far as Penobscot Bay. Includes Montreal, Quebec City and the St. Lawrence Valley. Parts of New Brunswick, Vermont and New York are also included. In Canada, the map includes several interesting notes, such as, 'The Indians report this country to be full of small Lakes and Streams,' 'Rugged and Hilly Country' etc.

This map was originally published by Baldwin and Cradock and copyrighted in 1832, but was issued in Volume two of Chapman and Hall's 1844 edition of Maps of the Society for the Diffusion of Useful Knowledge. It was engraved by John Walker of J. and C. Walker.