1844 Black Map of Egypt, Asia Minor and the Sinai Peninsula 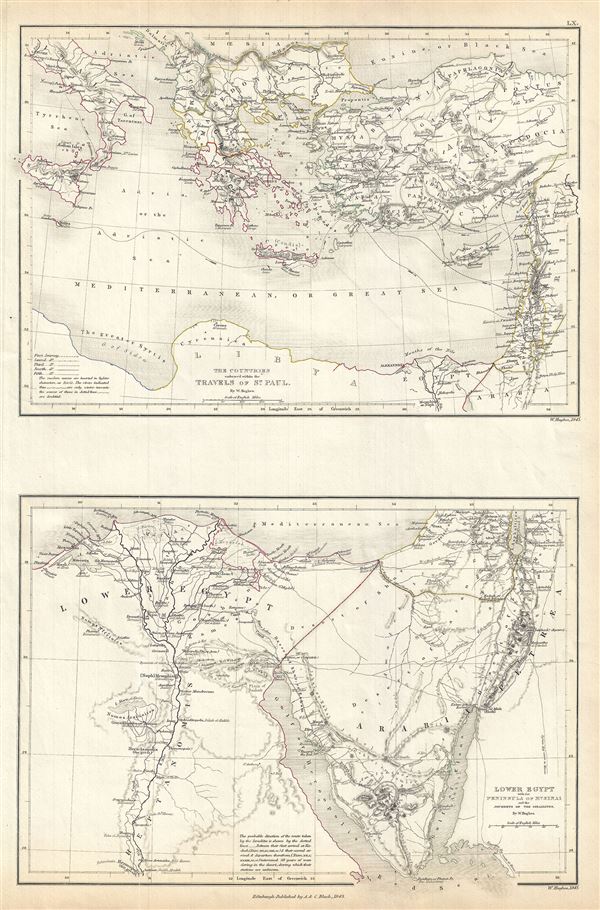 1844 Black Map of Egypt, Asia Minor and the Sinai Peninsula

This is a fine example of Adam and Charles Black's 1844 Biblical reference map of Greece, Italy, Asia Minor and Lower Egypt in antiquity. The map is divided into two parts: The upper map covers the countries traveled by St. Paul, which include Italy, Greece and the Balkans and Asia Minor south as far as Arabia and Egypt. The lower map depicts the Sinai Peninsula and Egypt and follows the journeys of the Israelites. It covers Egypt, centered on the Nile River, and extending south as far as Hermopolis. Both maps feature ancient and contemporary place names, i.e.. Candia and Crete, for each destination - an invaluable resource or scholars of antiquity. Throughout, the map identifies various cities, towns, rivers, mountain passes and an assortment of additional topographical details with relief shown by hachure.

The journeys of St. Paul are depicted on the upper map by variously dotted lines to differentiate from the first to the fifth journey. The lower map also depicts the Journeys of the Israelites from their first arrival at Kadesh and their second and third arrival and departure thereof. It shows the course of the Israelites as they fled out of Egypt, across the Red Sea, and subsequently spent the next forty years wandering in the Sinai before migrating into the Promised Land by crossing the Jordan River just north of the Dead Sea. This map was engraved by Sidney Hall for issue as plate no. LX in the 1844 edition of Black's General Atlas.