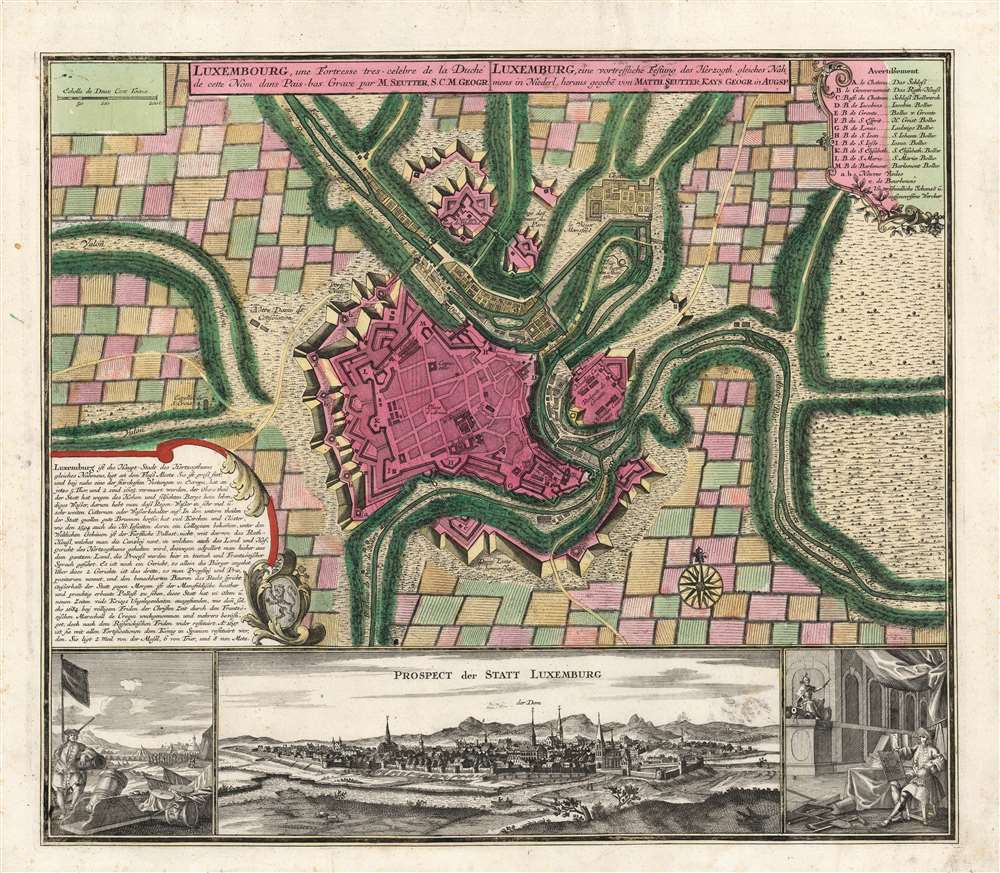 This beautiful, rare, separately issued plan and view of the city of Luxembourg by Matthias Seutter, c. 1734. It illustrates the situation of the fortified city during the renovation of its defenses in the 1730s, pictured here. These renovations were executed by the Austrian Habsburgs, whose rule over the city and the Duchy of Luxembourg was confirmed by treaty in the aftermath of the War of the Spanish Succession (1701 - 1714). The Duchy passed back and forth between the French, the Spanish, and the Austrians for many years. As each successive regime took possession, conquerors added to the defenses in an effort to preserve it from attack - most notably the distinctive walls instituted by the famed French military engineer Marquis de Vauban, whose fortifications are plainly visible on the map and can be seen in person today. Vauban's defenses would again be augmented under Austrian rule beginning in the 1730s, and some of these are visible on the map (in comparison, for example, with those defenses depicted on Nicolas de Fer's plan of the city produced in the 1690s.)

The upper portion of the engraving is a city plan, whose most notable features are the modern fortifications of the walled city. A legend at the top right names buildings and objects indicated by letters on the plan, while other parts of the fortifications are identified by name within the body of the engraving. At the lower left, within an ornamental frame, is a descriptive text regarding the city's location and defensibility, but also its churches and palaces - oddly, these include the Mansfeld Palace (also known as La Fontaine Castle). The writer describes the palace as having 'endured many wartime inconveniences in old and new times, such as those taken up in 1684 by the French' which stands in direct contradiction of the palace having been destroyed in that 1684 siege by the French.

Three engraved views decorate the bottom of the map. At the lower left is a scene of one of the many sieges withstood by Luxembourg. The city walls can be seen in the background, while in the foreground a soldier leans on a cannon with a musket on his shoulder. Beside him, in some disarray, are canons, tent material, and a siege mortar. In the middle distance, soldiers can be seen at drill. At the lower right, a seated gentleman surrounded with surveyors' tools displays his work: a plan for the fortress depicted on the map itself. (Is this the famed Marquis de Vauban, or a later engineer under Austria's Charles VI?) Whomever it is, he cocks an eye at the figure in the upper left-hand corner of the view: hirsute, helmeted, brandishing a sword and seated on a cannon, this can only be Ares, the god of war. (We criticize this choice of patron: it seems that Athena, the goddess of wisdom in war, would have been more apropos, but alas.) The reputation of the strength of the city's defenses remained long after this piece was printed. During the French Revolutionary Wars, the city held out after a seven-month siege, leading French politician and military engineer Lazare Carnot to declare Luxembourg 'the best fortress in the world, except Gibraltar.'

This engraving appeared in Seutter's 1734 Grosser Atlas, but the present example appears to have been a separately issued copy, given the absence of any centerfold. We are aware of only one example to have come on the market in the past fifteen years. There are sixteen examples in institutional collections.