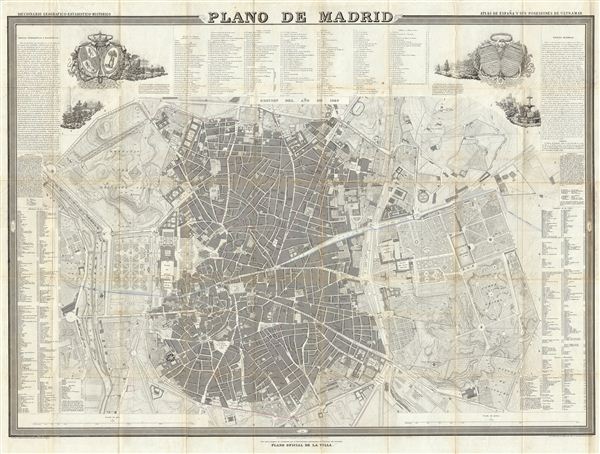 A fine example of Francisco Coello de Portugal y Quesada's massive map of Madrid, Spain. Coello's map is one of the finest and largest maps of Madrid to appear in the 19th century. Centered on the Puerta del Sol, this map covers the center of modern Madrid as well as the surrounding parks, farms, and estates - most of which have since been urbanized. Several decorative vignettes decorate the upper left and right quadrants. The map is advanced with detailed indexes identifying government offices, schools, libraries, museums, hospitals, convents, churches, theaters, streets, and plazas. Additional topographical and historical descriptive text appears in the upper left and right corners, respectively. Engraved by D. Juan Noguera in Madrid for Coello's unfinished opus Atlas de España y sus posesiones de Ultramar.

Very good. Some discoloration and wear on original fold lines. Backed on archival tissue for stability.
Looking for a high-resolution scan of this?