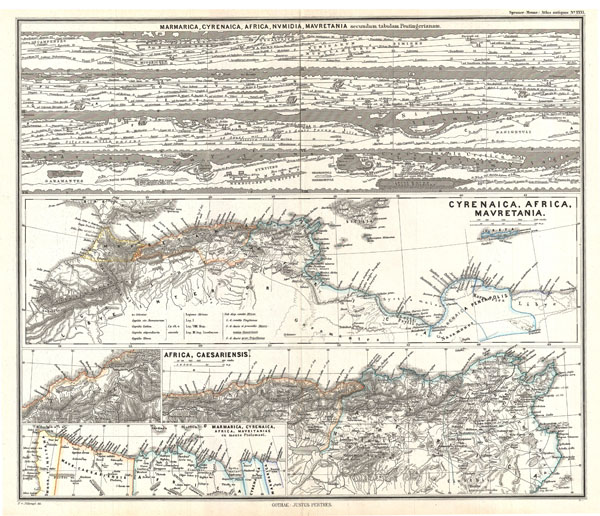 This is Karl von Spruner's 1865 map of Cyrenaica, Africa, and Mauretania, collectively known as The Maghreb. Presently, the Maghreb makes up the areas of Morocco, Algeria, Tunisia, Libya, Mauritania and the disputed territory of Western Sahara. Essentially three maps in one, this charts includes the Peutinger Table, named after Konrad Peutinger, who discovered the map in 1508. The Peutinger Map is an astoundingly important discovery that is today's only known example of a Roman world map, though the original Peutinger was itself a Mediaeval copy of the Roman original. The center map is Northern Africa and the island of Sicily. At the bottom are maps featuring Caesaria, the capital of the Roman province located in Northern Africa, and Marmarica. Map labels important cities, rivers, mountain ranges and other minor topographical detail. Territories and countries outlined in color. The whole is rendered in finely engraved detail exhibiting throughout the fine craftsmanship of the Perthes firm.