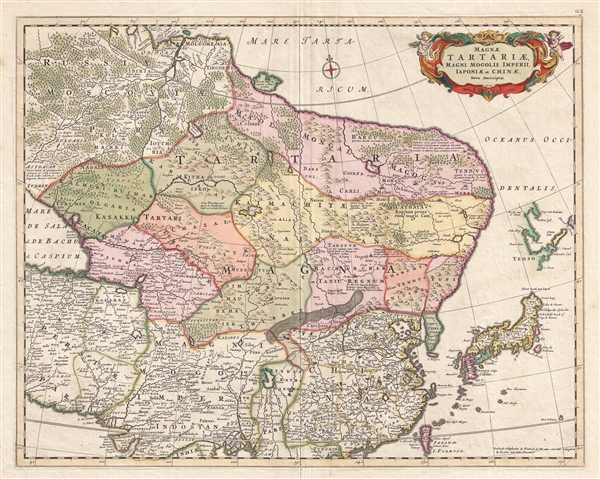 A beautiful example of Frederick de Wit's c. 1680 map of Tartary. The map covers from just north of the Arctic Circle to Formosa south to the the Bay of Bengal and Formosa, and from the Caspian Sea to Hokkaido or Yedso. Although parts of China, Japan, and northern India were somewhat mapped, most of northeastern Asia was fully unknown to western cartographers. The continent has here been given a curious rounded form that may be suggestive of a northeasterly route to Asia. Both the Great Wall of China and the Gobi Desert are clearly delineated. At the western edge of the map the overlarge Caspain Sea is erroneously mapped on an east-west rather than north-south axis.

Japan and Hokkaido (Yedso) are mapped according to the 1643 discoveries of Dutchmen Maerten de Vries and Cornelis Jansz Coen. Vries and Coen were in search of gold and silver isladns supposedly discovered early by a mysterious Spanish or Portuguese navigator, Juan de Gama. They sailed up the east coast of Japan and continued northward into the bay separating Honshū from Hokkaido. They skirted the east coast of this bay before discovering Kunashir, here Staten Land, the most westerly of the Japanese Kuril Island. They also sighted Iturup or Etorofu, the second Kuril Island. This island they only tenuously explored and named Compagnie, after the VOC, their sponsors. Subsequent maps assigned great mass to Compagnie on little more than speculation. These islands were not more properly mapped until the explorations of Vitus Behring.

This map was published both independently and as part of various complied and composite atlases.