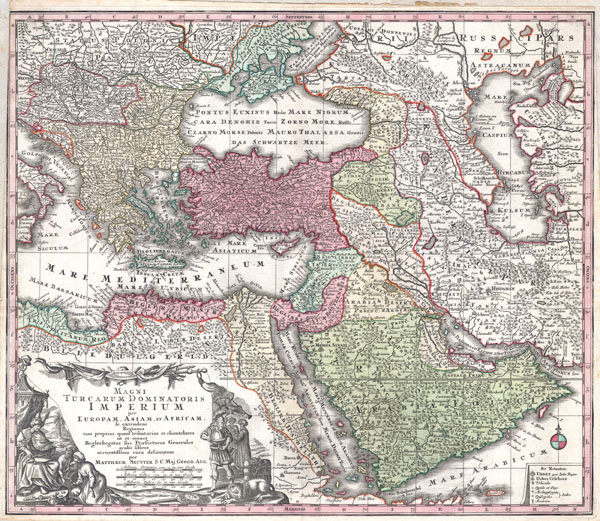 A spectacular c. 1730 map of the Ottoman Empire, including Greece, Turkey, Persia, Egypt and Arabia, by the important Augsburg map publisher Gerog Matthaus Seutter. Depicts from Italy eastward to the Caspian Sea, which is depicted in its entirety. Includes Crimea and the Caucuses: Georgia, Circassia and Armenia. Extends south to include all of Arabia and the northern tip of the Horn of Africa. Generally accurate with a few cartographic anomalies. The Dead Sea is over-large and misshapen. A large and nonexistent lake appears just west of the Nile Delta. In the lower left hand quadrant there is a large decorative title cartouche attributed to the Augsburg silversmith Abraham Drentwet. Depicts the ottoman Emperor gloriously robed with and enthroned. On the ground before him two men bow and offer hum treasures. The images on the right of the title offer a more allegorical references and include an European holding a globe, a lion, the Rod of Asclepius, a Medusa head shield and s spear. Angels with trumpets look on from above. A map key appears in the lower right quadrant. Cartographically similar to Visscher's 1690 map of the same area. This is a rather unusual state of the map and one of the few examples wherein 'S.G. Maj Geogr. Aug' follows Seutter's name in the title cartouche. The only comparable example we have found is in the British Museum.


Abraham Drentwett (1647 - 1729) was an important Ausgsburg artist and silversmith. He is best known for his master silverwork, much of which survives today. Drentwett was occasionally employed by Matthaus Seutter and other Augsburg engravers to create decorative embellishments and cartouches. Learn More...

Phillips 593. Tibbetts, G. R., Arabia in Early Maps: A Bibliography of Maps Covering the Peninsula of Arabia, Printed in Western Europe from the Invention of Printing to the Year 1751, #248. British Museum, Map Collections ; Maps * 43305.(6.).
Looking for a high-resolution scan of this?