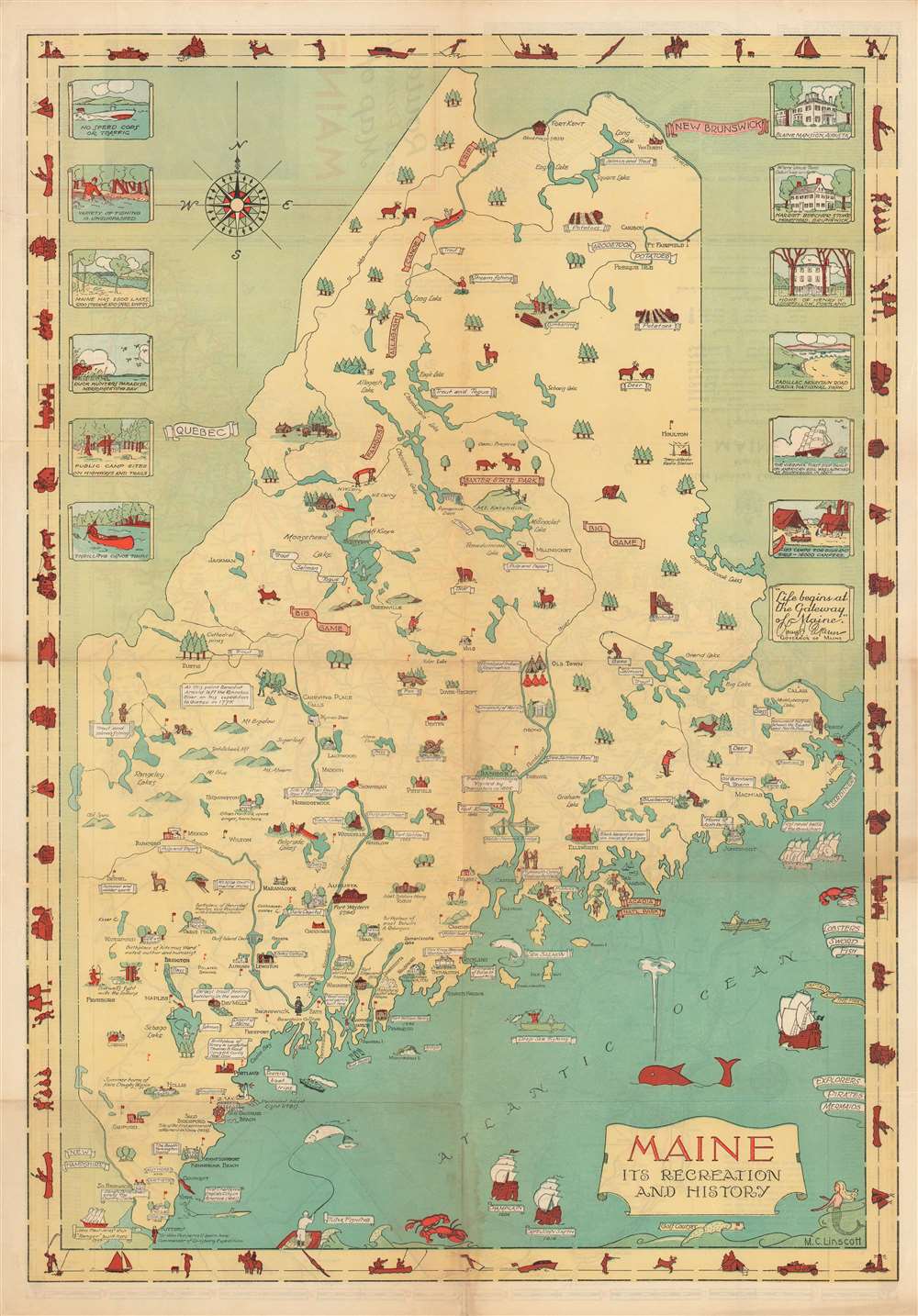 Highlights the natural wonders of the State of Maine - including Acadia National Park on Mount Desert Island.

This is a 1935 Mellon C. Linscott pictorial map of Maine. Charmingly illustrated and attractively colored, Linscott's map traces Maine's history, promotes its industries, and highlights the many recreational opportunities afforded to locals and visitors alike. Maine's frontier past is placed at the forefront, with numerous forts illustrated throughout the state, including Fort William Henry, Fort Halifax, and Fort Western. Both Champlain and Captain John Smith's voyages are references, and sites visited by Champlain are noted. Birthplaces of luminaries that hail from Maine are also marked, including Henry Wadsworth Longfellow and Harriet Beecher Stowe. Colleges and universities are illustrated throughout the state, as are other famous buildings.

Towns throughout the map are labeled, including Augusta and Portland. Maine's rich natural resources are certainly promoted by Linscott's work, most notably Acadia National Park on Mount Desert Island. People are seen hiking, golfing, and horseback riding on the island. Also of note is the promotion of the logging and paper industries, which must have played a critical role in Maine's economy. Wildlife, such as bears, foxes, bobcats, and deer, are illustrated throughout, some of which are being stalked by hunters shown in bright orange coats and hats. Anglers are active in most of Maine's lakes, and Linscott highlights the plethora of fish species available to anglers in Maine's lakes and off its coast. Vignettes along the upper portion of the left border illustrate several of the outdoor activities practiced by people in the state, while those along the right border present views of famous locations throughout Maine, including the homes of Harriet Beecher Stowe and Henry Wadsworth Longfellow, and a view of Cadillac Mountain Road in Acadia National Park.

Mellon C. Linscott (fl. c. 1930 - 1970) was an American artist and engineer who lived and worked in Maine and New Hampshire. He was commissioned by the state of Maine and various municipalities in the 1930s to create maps of these areas. He included artistic views of local landmarks and recreational activities along with the standard elements found on maps. He also created a few specially commissioned maps for individual families. Today, Linscott's grandson operates a business named Linscott Maps that follows in Linscott's footsteps: creating custom-made maps for private clients.

Very good. Light wear along original fold lines. Old repaired tear extending one and one half (1.5) inches into printed area evident on verso. Highway map of Maine on verso.