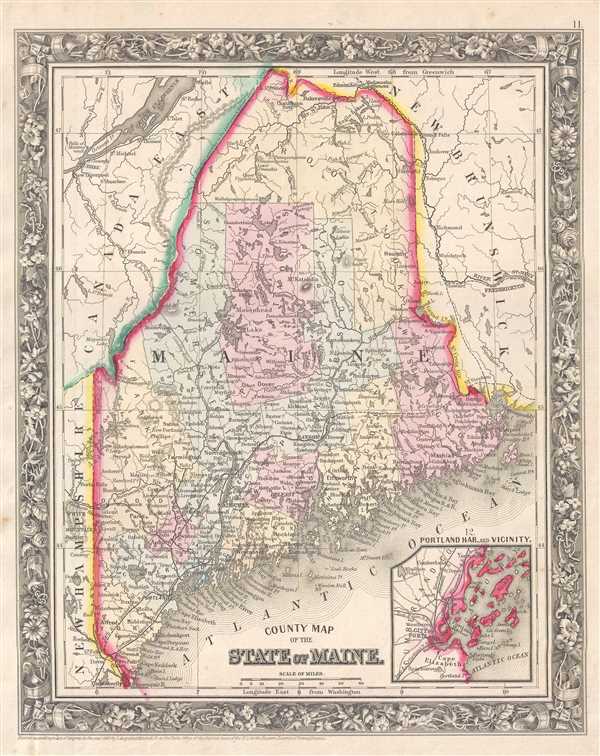 Labels the short-lived York and Cumberland Railroad, the Portland, Saco, and Portsmouth Railroad, and the European and North American Railway.

This is an 1861 Samuel Augustus Mitchell, Jr. map of Maine. The map depicts the region from New Hampshire to New Brunswick and from Quebec, Maine, and New Brunswick to the Atlantic Ocean. A handful of railroads are also illustrated and labeled. One such railroad is the York and Cumberland, which operated from 1846 until 1865 and was reorganized as the Portland and Rochester Railroad, a branch line of the Boston and Maine Railroad, in 1867. Another, the Portland, Saco, and Portsmouth Railroad, began operations in 1842, and was jointly operated by the Boston and Maine Railroad and the Eastern Railroad, which shared the track for their operations between Portland and Boston. In 1872 the Portland, Saco, and Portsmouth was purchased by the Eastern Railroad, which, in turn, was bought by the Boston and Maine in 1884. Today, portions of the route have been converted into a rail trail known as the Eastern Trail. The projected route of the European and North American Railway between Nova Scotia and Portland, Maine is illustrated by a dashed line, indicating that it had not yet been completed. Apart from the railroads, individual counties are illustrated, labeled, and shaded different colors to allow for easy differentiation. Cities, towns, and villages are labeled throughout, including Portland, Augusta, and Bangor, along with rivers, creeks, and lakes. An inset map in the lower right corner depicts the vicinity of Portland Harbor, the coast of Maine from Yarmouth to Cape Elizabeth. Roads, railroads, and even individual streets in Portland are illustrated, along with numerous islands in Casco Bay. The whole is surrounded by the attractive floral border common to Mitchell atlases between 1860 and 1865.