1885 Poole View of the Camp of the Maine First Brigade, Augusta, Maine 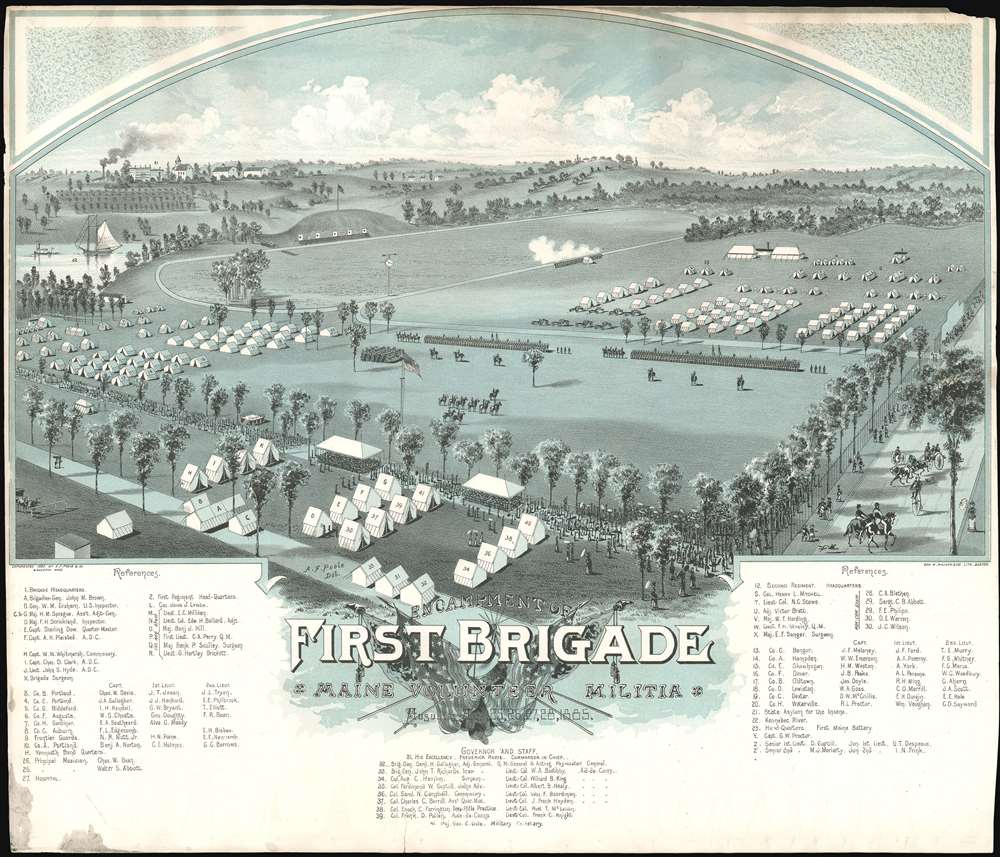 1885 Poole View of the Camp of the Maine First Brigade, Augusta, Maine

A rare 1885 Poole / Walker view of the encampment of the Maine Volunteer Melita, First Brigade at Augusta, Maine. The view reveals a large parade ground with tents in the foreground. The Kennebec River appears in the background, as does the Augusta 'State Asylum for the Insane.' This view illustrates an annual encampment of the 1st Brigade required by general orders issued in 1884.

The First Maine Volunteer Militia was an infantry regiment initially conceived in 1847 during the Mexican American War. Although an order came from President James K. Polk to organize a regiment, officers were never assigned, and the regiment was never mustered. Various Maine volunteer companies did emerge in the 1850s. The 58 companies based near Portland Maine were ultimately organized as the First Brigade (1st Regiment). The 1st Maine was formally called up by President Abraham Lincoln at the start of the American Civil War in 1861. The regiment was mustered out of service in August of 1861, but many of the individual soldiers continued to fight in other regiments. The 1st Maine was remusterered into service in August of 1898 in anticipation of violence in the Spanish-American War.

This view was drawn by Albert F. Poole of Brockton Massachusetts and published in 1885 by George H. Walker and Company. The flags and title are signed by C. E. Jörgensen, 1885. It appears to be quite rare. There is a reference in the OCLC, but no holdings are identified. We are aware of examples at the Boston Public Library, the Library of Congress, and the Maine Historical Society

Albert 'Bert' Poole (1853 - November, 1934) was an American painter, cartoonist, and viewmaker active in New England during the late 19th and early 20th centuries. Pool was born in Brockton (North Bridgewater), Mass. and was responsible for at least 46 town views published between 1880 and 1905. Early in his career he worked as a clerk and school principle. He turned his attention to the visual arts in 1880, when is fist city view, Bar Harbor Maine, was published by J. J. Stoner. He partnered with another view maker George E. Norris (1855 - 1926), in 1993, published as 'Poole and Norris.' Around the turn of the century, he began publishing under the imprint of 'Bert Poole Co. Boston.' He is known for having a distinctive style employing decorative borders, attractive titles, and vignette imagery. He frequently used a gravure technique, imparting on his images a graduated tonal effect. This is some confusion regarding his death date. Some references (Reps) identify it as 1834, others, 1839. His obituary in the Boston Globe confirm a November 1934 death. Learn More...