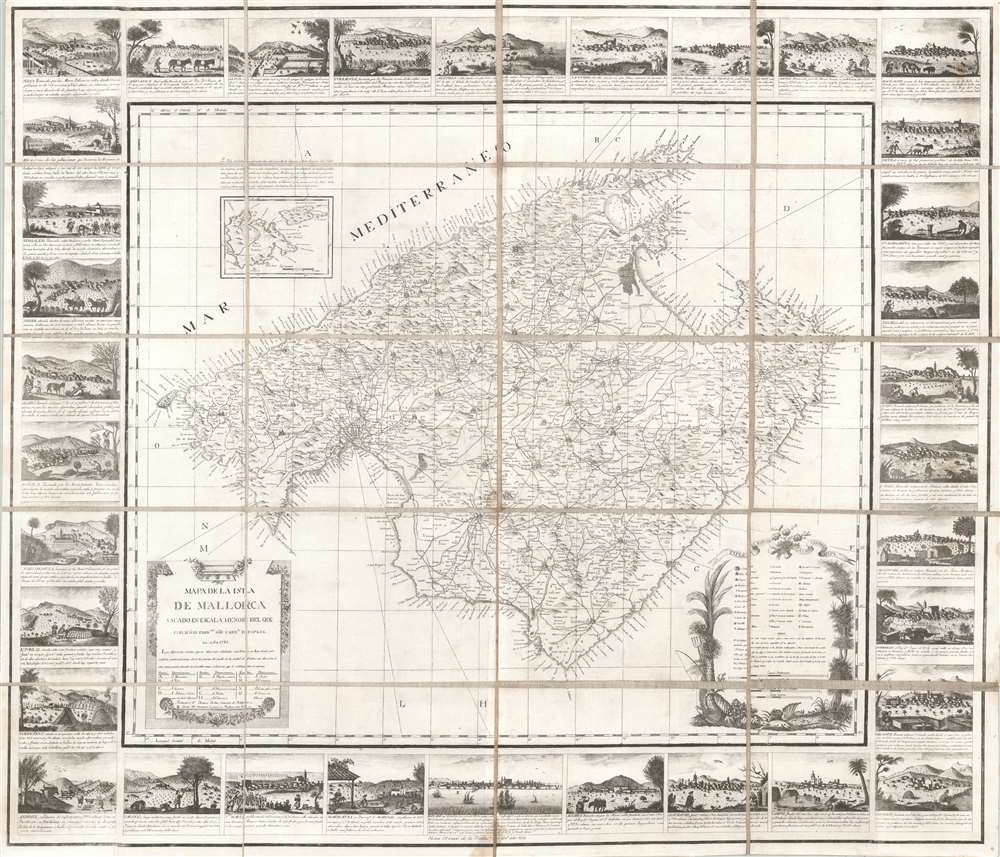 Extraordinary and rare map of Mallorca with decorative borders.

An exceptionally rare 1814 / 1829 separately issued broadside map of Majorca (Mallorca), Spain, with fully illustrated surround. The map covers all of Mallorca with an inset illustrating the nearby islands of Cabrera and Conejara. It is based upon an earlier 1785 map surveyed at the order of Cardinal Antonio Despuig y Dameto. Manuel Briton, the island's Artillery Commissioner, partnered with Lorenzo María Muntaner (1782 - 1848), son of the original engraver, to revise the map for sale to tourists in 1814. The map is in Spanish, as are the caption on the surrounding views, but the imprint of Briton and Muntaner is in Catalan. The base map is quite rare and beautiful, but what makes this example special is the decorative surround featuring 34 captioned views of Majorcan towns and villages.

This map was issued in at least three editions. The first edition featured just the map, and was issued in 1785 by Cardinal Despuig and engraved by José Mariano Muntaner y Moner. The second, was re-engraved with added vignette views by Jose's son, Lorenzo María Muntaner and published by Manuel Briton in 1814. A second state of the 1814 edition appeared in 1829 with revised census data. The 1829 state, as here, is typically found dissected and mounted on linen. The OCLC notes only two examples with views, both located in the Institut Cartografic, Barcelona. For any serious collector of Balearic Islands, this map, published in Palma de Mallorca, is an exceptional opportunity.

Antonio Despuig y Dameto (March 30, 1745 - May 2, 1813) was a Spanish archbishop and cardinal. Despuig was born in Palma de Mallorca in the Ca'n Montenegro, the third of eight children of Ramón Despuig Cotoner, 3rd Count of Montenegro and 5th Earl of Montoro, and his wife Maria Dameto and Sant Martí Sureda, of Catalan Bellpuig marquesal house. As a youth he was tutored privately, but eventually entered the Jesuit Colegio Montesión Palma, graduating in 1760. He received his tonsured at Palma Cathedral in 1764. In 1768 he received minor orders, became a deacon in 1771, and underwent priestly ordination in 1774. He became Canon of the Cathedral of Palma de Mallorca, and in this position traveled extensively throughout Europe. Continuing his in Mallorca, at the Estudi General Lul·lià (Universidad Luliana), receiving a doctorate in 1779. Between 1773 and 1785, he was the rector of the Estudi General Lul·lià. During this time he amassed a cartographic collection related to the island of Mallorca. In 1795 he was named was Archbishop of Seville (1795 -1799) and Latin Patriarch of Antioch (1799 - 1813). He was made a cardinal by Pope Pius VII and died in Lucca in 1813. Learn More...