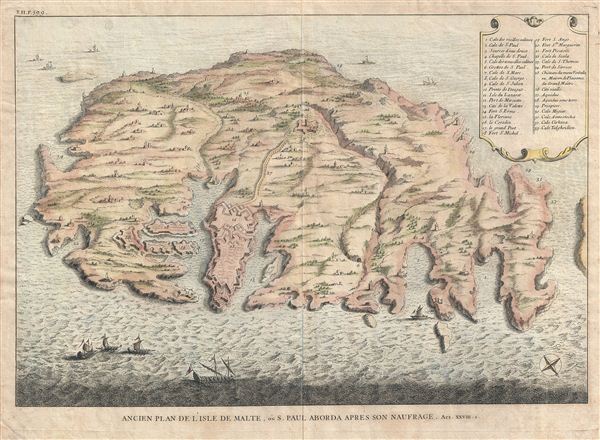 A scarce and visually stunning Augustin Calmet 1729 topographical map and view of Malta. The map, which is oriented with north in the lower right corner, illustrates the island in full from a birds-eye perspective, with mountains, buildings, trees, and fortifications rendered in profile. This map was originally prepared for a Dutch Bible to illustrate the shipwreck of St. Paul (Acts 27.27-.32). Legends suggest that around the year 60 AD Paul's ship, which was transporting him from Caesarea to Rome, wrecked in St. Paul Bay on the eastern side of the Island. Saint Paul stayed in Malta for about three months where he performed a number of miracles, including the healing of the father of Publius, Malta's Roman governor. Whether or not this has any truth, the Malta depicted here represents a more contemporary perspective. The fortifications of Valletta are clearly visible as are various small towns, fortifications, and lookout towers. A key in the upper right quadrant corresponds to numerical references found throughout the map. Drawn by Augustin Calmet and engraved by Abraham de Putter in Amsterdam for an unknown Dutch Bible.