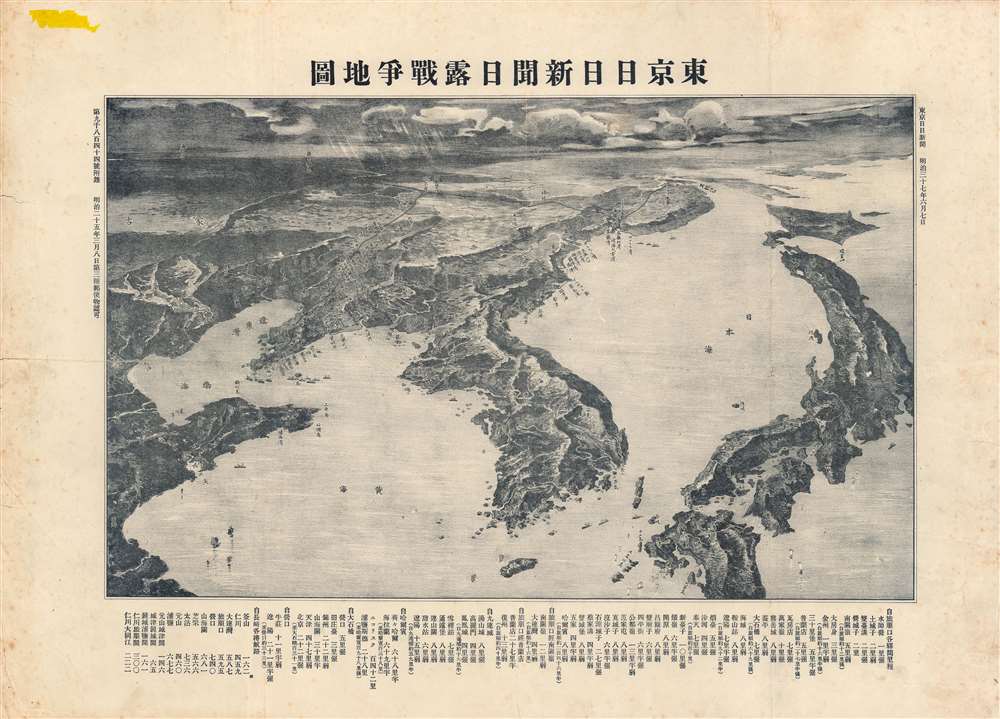 This is a very rare 1904 or Meiji 37 bird's-eye view map of Northeast Asia covering Manchuria, Korea, and Japan. The view was distributed by the Japanese news daily Tokyo Nichi Nichi Shimbun. Its modified view style illustrates regional topography as well as major cities and ports relevant to the Russo-Japanese War (1904 - 1905).

The map also shows railways and other transportation networks critical to the war. Most notably, it shows the all-important China Eastern Railway, and its southern branch connecting Harbin (哈爾濱) to Changchun (長春), Mukden (Fengtian; 奉天), Jinzhou (金州) and Port Arthur (旅順口; Lüshunkou), one of the main causes and objectives of the war. The information at the bottom lists the distance between Port Arthur and towns near the frontlines, including distances using various routes, as well as the distances between some other strategically important towns and cities (Jiuliancheng, Harbin, Dashiqiao, Yingkou), and the distance by sea from Nagasaki to strategically important ports in Korea and China. Many of these place names would have been familiar to the Japanese reading public, which was inundated with information about the war in newspapers and would therefore have been able to use this map as a visual aid to daily updates about the progress of the war. The distances are marked by the Japanese unit of measurement ri (里), which is much longer (about 2.44 miles) than the traditional Chinese li, which uses the same character.

When this map was produced, the first major land battles of the war had just taken place. Japanese troops had recently crossed the Yalu River into Manchuria and also made progress in their siege of heavily entrenched Russian troops at Port Arthur (at left-center), taking Nanshan in Jinzhou (金州), just next to Jinzhou Bay (金州灣). By showing topography, rivers, and other geographical features in a three-dimensional perspective, the viewer gains some appreciation of the difficult terrain and limited infrastructure in Manchuria, which contributed to the length of the war.

The Russo-Japanese War, fought from February 8, 1904 - September 5, 1905, pitted Imperial Japan against Tsarist Russia over rival imperial ambitions in Manchuria and Korea. Both Russia and Japan had grand visions for the region. Russia traditionally had only one Pacific port, Vladivostok (浦塩斯徳 here), which was operational only during the warm summer months. In 1898, Russia coerced China, then weakened after the First Sino-Japanese War (1894 - 1895), to lease them Port Arthur, a warm water port on the Liaodong Peninsula. They also negotiated a right-of-way to connect Port Arthur to the China Eastern Railway, which ran from nearby Jinzhou (Dalian, Dalniy) to Harbin, crossroads of the China Eastern Railway, which ultimately linked up with the Trans-Siberian Railway. Russia, eager to expand southwards from Siberia, considered Port Arthur the cornerstone of a sphere of influence covering Manchuria and Korea. Japan had its own imperial ambitions and saw itself as the natural overlord in East Asia, particularly after their victory in the First Sino-Japanese War (1894-1895). Korea and Manchuria in particular were important to the Japanese as steppingstones into China, with its seemingly unlimited resources.

There was initially some attempt at negotiation between the imperialist powers, but Tsar Nicholas II arrogantly believed it impossible that Japan could challenge a major European power. Japan proved him wrong, launching a surprise attack on the Russian Eastern Fleet stationed at Port Arthur. The Russians were unable to defeat the Japanese at sea and steadily lost ground on land, despite imposing heavy losses on the Japanese. The costs of the war and simmering discontent forced the Tsar to negotiate and U.S. President Theodore Roosevelt arbitrated a peace, confirmed by the Treaty of Portsmouth. The overwhelming victory of Imperial Japan came as a surprise to international observers, being the first major military victory in the modern era of an Asian over a European power. The consequences transformed the balance of power and confirmed Japan as the pre-eminent power in East Asia.

This map is dated as June 7, 1894 and was published by the Tokyo Nichi Nichi Shimbun (東京日日新聞), an important newspaper of the Meiji period (it later merged with the Osaka Mainichi Shimbun to create the Mainichi Shimbun). The text on the left side indicates that this map was an addendum sent to subscribers. We note no cataloged examples in any libraries, research centers, or other institutional catalogs. Rare to the market.