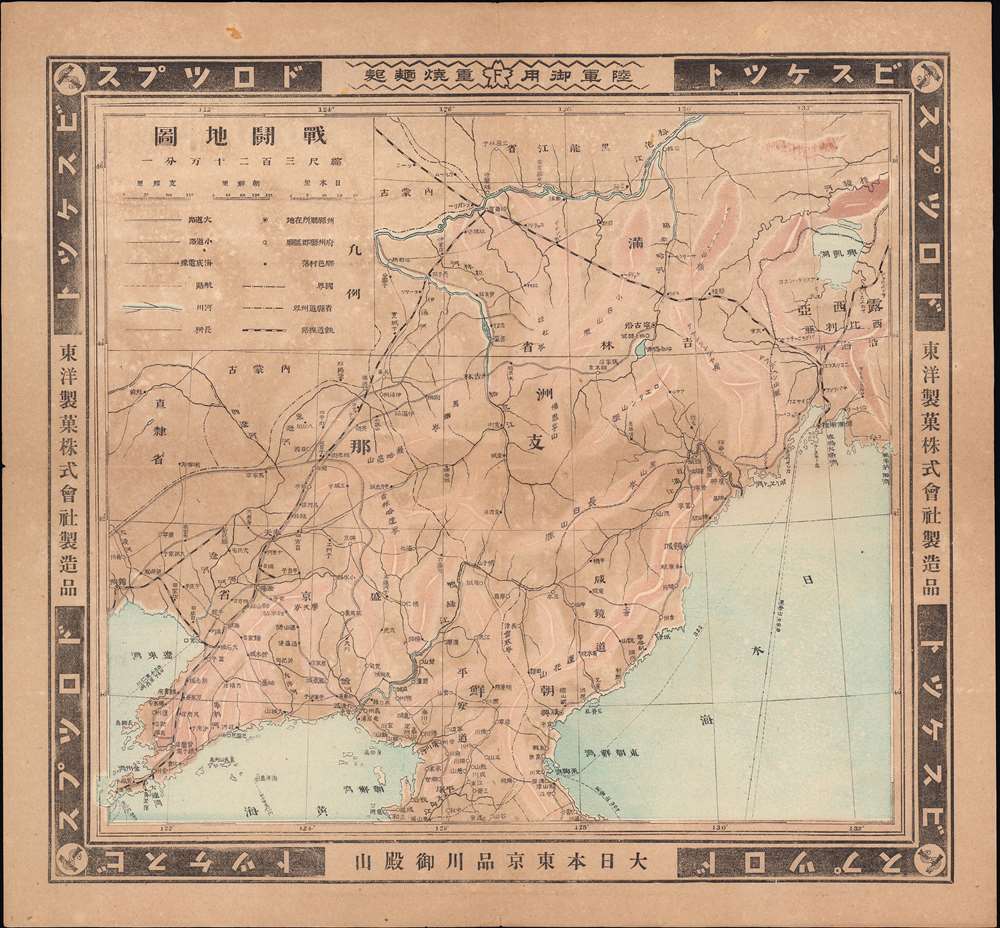 This is a peculiar and very rare c. 1905 'battle map' of Manchuria produced by the Tōyō Confectionary. While this may seem an odd producer for a war map, Tōyō was a major purveyor of food for the Japanese military, namely hardtack biscuits, and thus had a sustained interest in the course of the conflict.

Despite being distributed by a confectionary, the map is quite detailed and contains important military information. The legend includes administrative information, roads, railways, telegraph lines, and three scales using Chinese li and Japanese and Korean ri (using the same character 里 but differing significantly in length). At right is Vladivostok (浦潮斯徳) and at bottom-left is Port Arthur (旅順), the critical objective of the war.

It is possible that the map was packaged and distributed along with the biscuits given to soldiers to familiarize them with the basic geography of the region. Another possibility is that this map intended to advertize Tōyō's connection with the war effort to civilian customers, who were widely supportive of the conflict.

The map is ringed with the words 'biscuit' (ビスケット) and 'drop' (ドロップス) along with the name and address of the Tōyō Confectionary. At top is a brief statement that Tōyō is a purveyor for the Imperial Japanese Army

The Tōyō Confectionary was a joint-stock company established by a group of confectioners and bakers in Tokyo and Yokohama, and based in Gotenyama, Shinagawa, Tokyo. The company's leaders included Kimura Gishirō (木村儀四郎) of the Kimuraya Sohonten, a popular bakery that claims to be the inventors of the anpan, the sweet roll filled with red bean paste that is a staple of East Asian bakeries.

Kimura previously made biscuits for the Japanese military and Tōyō inherited and expanded this business. According to the company's website, the Japanese military saw the advantages of hardtack biscuits by observing Western soldiers during the Eight Nation Alliance military campaign against the Boxer Uprising in China. The military tasked Tōyō with building a factory to provide sufficient hardtack for a major conflict, and Tōyō biscuits became a staple for troops during the Russo-Japanese War.

Although they have the same name in Chinese characters, Tōyō was not related to the Korean confectionary Tongyang, which later became Orion (주식회사 오리온), maker of the famous Choco Pie.

The Russo-Japanese War, fought from February 8, 1904 - September 5, 1905, pitted Imperial Japan against Tsarist Russia over rival imperial ambitions in Manchuria and Korea. Both Russia and Japan had grand visions for the region. Russia traditionally had only one Pacific port, Vladivostok, which was operational only during the warm summer months. In 1898, Russia coerced China, then weakened after the First Sino-Japanese War (1894 - 1895), to lease them Port Arthur, a warm water port on the Liaodong Peninsula. They also negotiated a right-of-way to connect Port Arthur to the China Eastern Railway, which ran from nearby Jinzhou (Dalian, Dalniy) to Harbin, and ultimately linked up with the Trans-Siberian Railway.

Russia, eager to expand southwards from Siberia, considered Port Arthur the cornerstone of a sphere of influence covering Manchuria and Korea. Japan had its own imperial ambitions and saw itself as the natural overlord in East Asia, particularly after their victory in the First Sino-Japanese War (1894 - 1895). Korea and Manchuria were also important to the Japanese as steppingstones into China, with its seemingly unlimited resources.

There was initially some attempt at negotiation between the imperialist powers, but Tsar Nicholas II arrogantly believed it impossible that Japan could challenge a major European power. Japan proved him wrong, launching a surprise attack on the Russian Eastern Fleet stationed at Port Arthur. The Russians were unable to defeat the Japanese at sea and steadily lost ground on land, despite imposing heavy losses.

The costs of the war and simmering discontent forced the Tsar to negotiate, with U.S. President Theodore Roosevelt arbitrating a peace, confirmed by the Treaty of Portsmouth. The victory of Imperial Japan came as a surprise to international observers, being the first major military victory in the modern era of an Asian over European power. The consequences transformed the global balance of power and confirmed Japan as the pre-eminent power in East Asia.

The treaty recognized Japan's claims on Korea and called for the evacuation of Russian forces from Manchuria. Port Arthur was handed over to the Japanese, who renamed it Dairen (now Dalian), as was the southern section of the China Eastern Railway, which became known as the South Manchuria Railway. The company created to manage the railway, the South Manchuria Railway Company (Mantetsu), soon developed into a mega-conglomerate, overseeing hotels, mines, mills, power plants, and much more, that expanded Japanese influence in Manchuria to the point that it became a virtual colony.

This map is undated and does not contain any publication information aside from the name and address of the Tōyō Confectionary. It does not appear in any institutional holdings and has no known history on the market.

Tōyō Confectionary (東洋製菓株式會社; fl. c. 1900 - 1927) was a Japanese confectionary formed as a joint stock corporation backed by several confectioners and bakers in Tokyo and Yokohama, including Kimura Gishirō (木村儀四郎). Tōyō had a particularly and important reliable customer in the Japanese military, which ordered hardtack biscuits from the company in the era of the Russo-Japanese War. Tōyō also had an in-house publisher that produced books about confectionery and at least one map of Manchuria during the Russo-Japanese War. Learn More...

Very good. Slight wear along the margins. Even overall toning.