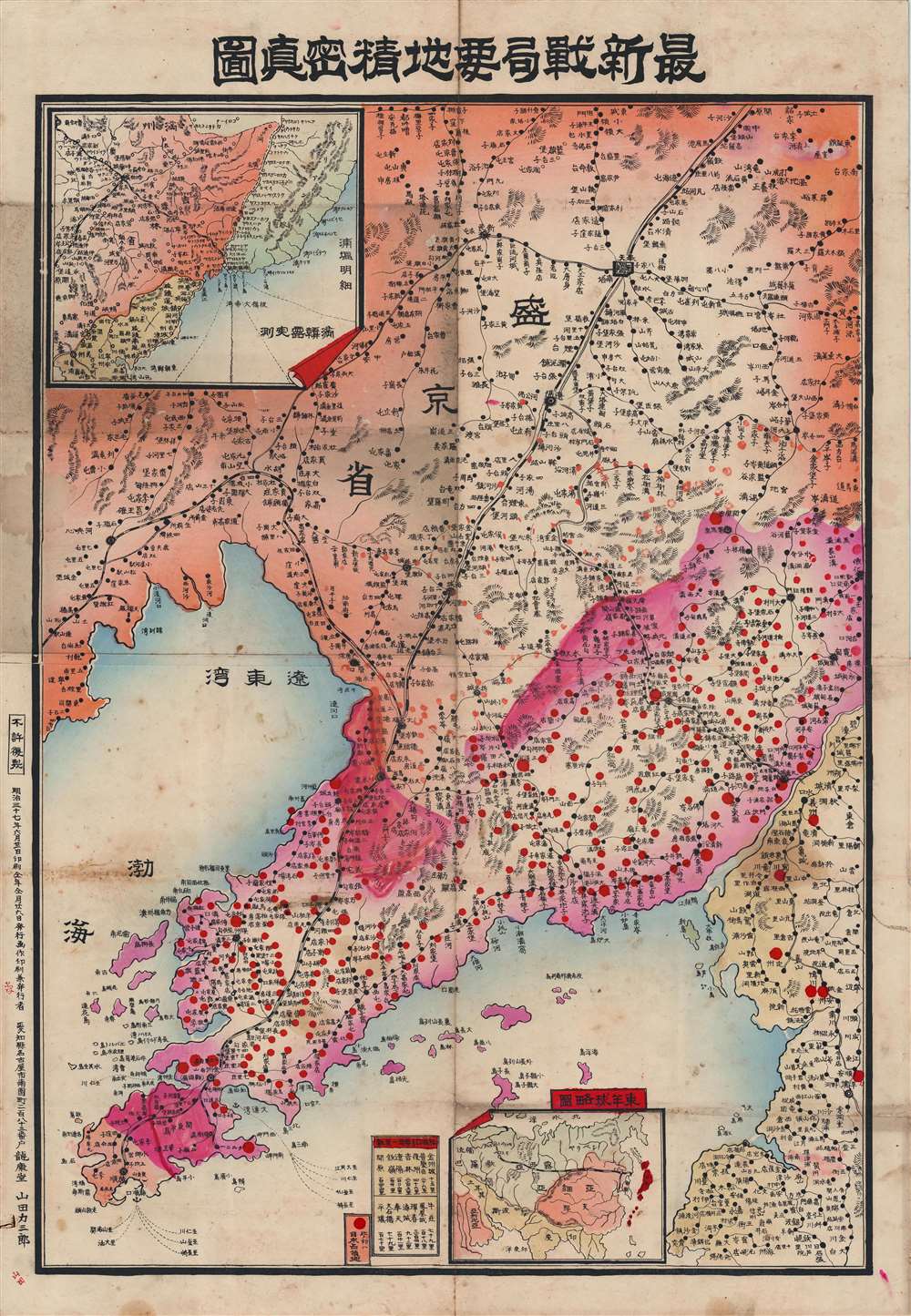 This is a very rare and detailed 1904 Yamada Rikizaburō map of the Liaodong Peninsula during the Russo-Japanese War (1904 - 1905) and highlights the position of Japanese troops in Korea and Manchuria in August 1904. The map is extremely detailed in its inclusion of place names, rail lines, roads, and sea routes, and has significant annotations, namely red dots, shaded areas, and hand-written place names (Anping 安平, near Liaoyang 遼陽) showing Japanese-occupied territory. The table at bottom-center lists the distance between Port Arthur (旅順口 Lüshunkou), at the tip of the Liaodong Peninsula at bottom-left, and various towns and cities near the frontlines. The distances are marked by the Japanese unit of measurement ri (里), which is much longer (about 2.44 miles) than the traditional Chinese li, which uses the same character. The inset map at bottom-center-right is a map of Eurasia highlighting the route of the Trans-Siberian and China Eastern Railways. The inset map at top-left is a detailed map of Vladivostok, Peter the Great Gulf, and environs.

This map was produced after string of Japanese naval victories foiled Russian attempts to break the Japanese naval cordon around Port Arthur. Meanwhile, while Japanese ground forces made considerable advances in Manchuria, they saw only slow and costly progress against the heavily fortified Russian positions approaching Port Arthur. Nonetheless, in the weeks before this map was issued, a number of strategic positions had been taken and soon afterwards the Japanese captured Liaoyang.

The Russo-Japanese War, fought from February 8, 1904 - September 5, 1905, pitted Imperial Japan against Tsarist Russia over rival imperial ambitions in Manchuria and Korea. Both Russia and Japan had grand visions for the region. Russia traditionally had only one Pacific port, Vladivostok, which was operational only during the warm summer months. In 1898, Russia coerced China, then weakened after the First Sino-Japanese War (1894 - 1895), to lease them Port Arthur, a warm water port on the Liaodong Peninsula. They also negotiated a right-of-way to connect Port Arthur to the China Eastern Railway, which ran from nearby Jinzhou (Dalian, Dalniy) to Harbin, and ultimately linked up with the Trans-Siberian Railway. Russia, eager to expand southwards from Siberia, considered Port Arthur the cornerstone of a sphere of influence covering Manchuria and Korea. Japan had its own imperial ambitions and saw itself as the natural overlord in East Asia, particularly after their victory in the First Sino-Japanese War (1894-1895). Korea and Manchuria were also important to the Japanese as steppingstones into China, with its seemingly unlimited resources.

This map was produced by Yamada Rikizaburō on August 21, 1904 and published on August 26 of the same year by Ryukando (龍康堂) a Nagoya-based publisher. It is the only known copy. The fact that the map says 'Do not copy' (不許復製), as well as the annotations mentioned above and handwritten characters in the margins, suggest that this may have been a draft or a map for internal use by a military or government office.