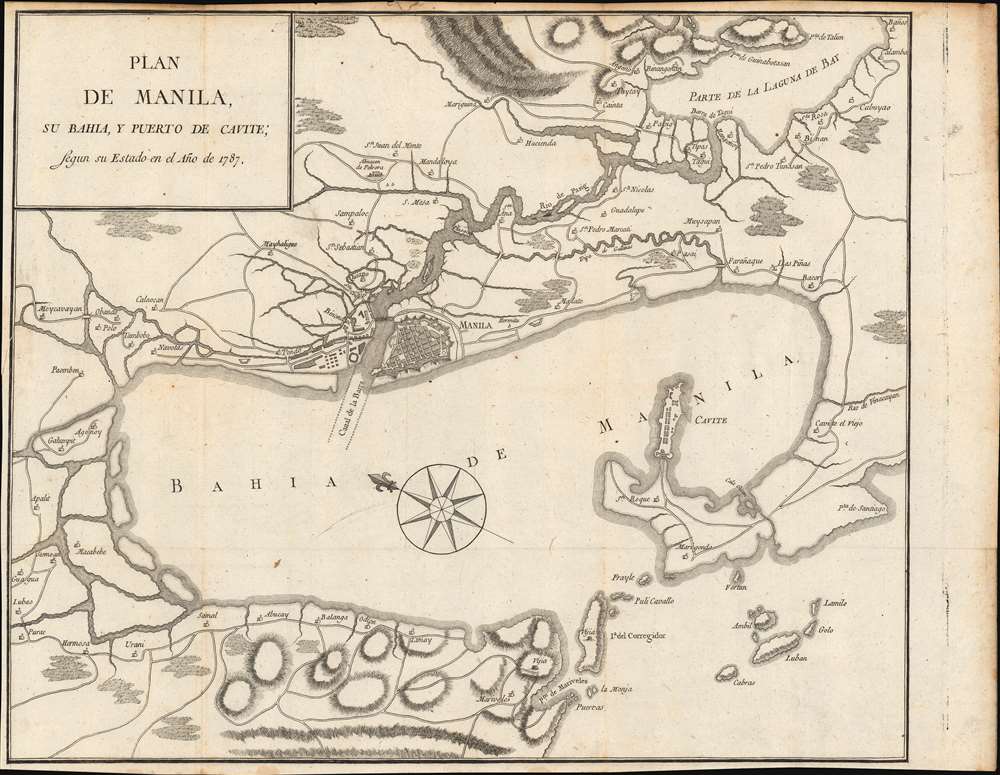 This is an extremely scarce 1790 map of the Manila, Philippines, prepared for Pedro Jiménez de Góngora y Luján, Duque Almodóvar del Río. Oriented roughly to the east, the map is centered on Manila embraces Manila Bay and vicinity stretching eastward as far inland along the Pasig River to Laguna de Bay, and north to include the Pampanga Delta to Guagua.

Góngora's sources for this map are unclear. Some suggest it is derived from Pedro Murillo Velarde's 1734 Carta Hydrographica y Chorographica de las Islas Filipinas, but we do not find this to be a supportable position. The present map offers different information and detail than that which appears on the older Velarde. While the Velarde map somewhat correctly maps the form of Manila Bay, here it has been compressed into an oblong oval. That being said, the present map offers considerable unique new detail regarding roads, church construction, towns, and the locations of specific buildings not evident on any earlier map, suggesting unknown contemporaneous sources.

This map was made to illustrate Historia política de los Establecimientos Ultramarinos de las Naciones Europeas, published in Madrid between 1784 and 1790. This map appeared in the final volume, published in 1790. No engraver is credited. The separate map is rare both in institutional collections and to the market with but a single example noted in the OCLC.

Pedro Francisco de Luján y Góngora (September 18, 1727 - May 14, 1784), 1st Duke of Almodóvar del Río, was a Spanish nobleman, ambassador, and historian. He was made a Grandee of Spain in 1779 and was named 1st Duke of Almodóvar del Río on July 11, 1780. He was the fourth director of the Real Academia de la Historia from January 6, 1792 to May 14, 1794 when he died, although his death has also been quoted as 1796. From 1784, annoyed at the anti-Spanish verbiage of Guillaume Thomas François Raynal's popular Histoire philosophique et politique des établissements et du commerce des Européens dans les deux Indes, Pedro set out to write his own version of the work, Historia política de los Establecimientos Ultramarinos de las Naciones Europeas. An ambitious 12 volumes were planned, but only 5 were published. The early volumes mirrored Raynal's work, but from volume 3, he introduced new ideas and concepts. Nonetheless, after volume 5, José Moñino y Redondo, the Count of Floridablanca (1728 - 1808) prohibited further publication. Learn More...