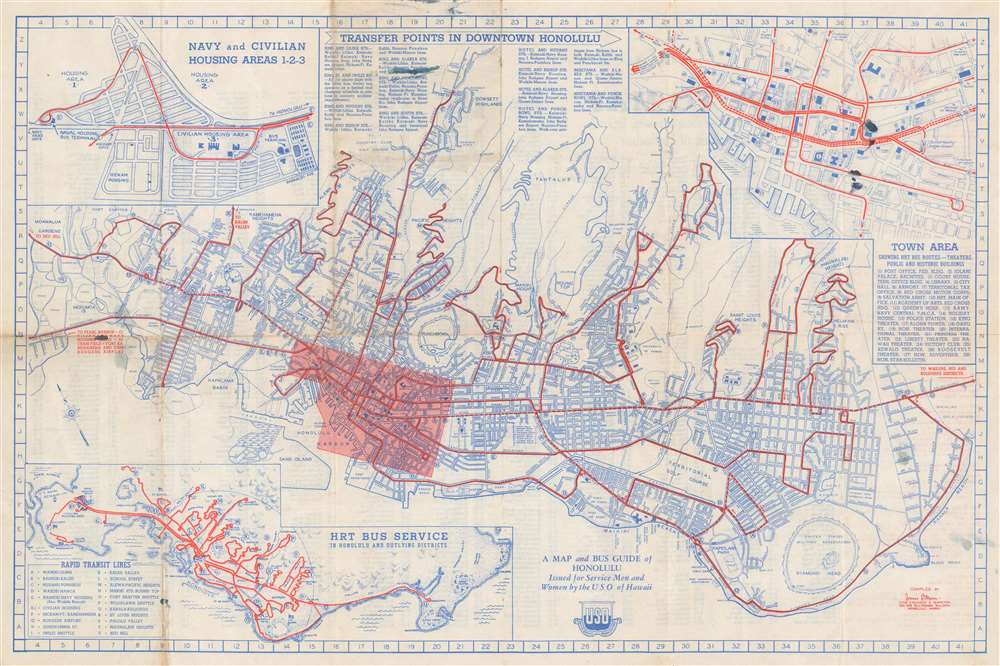 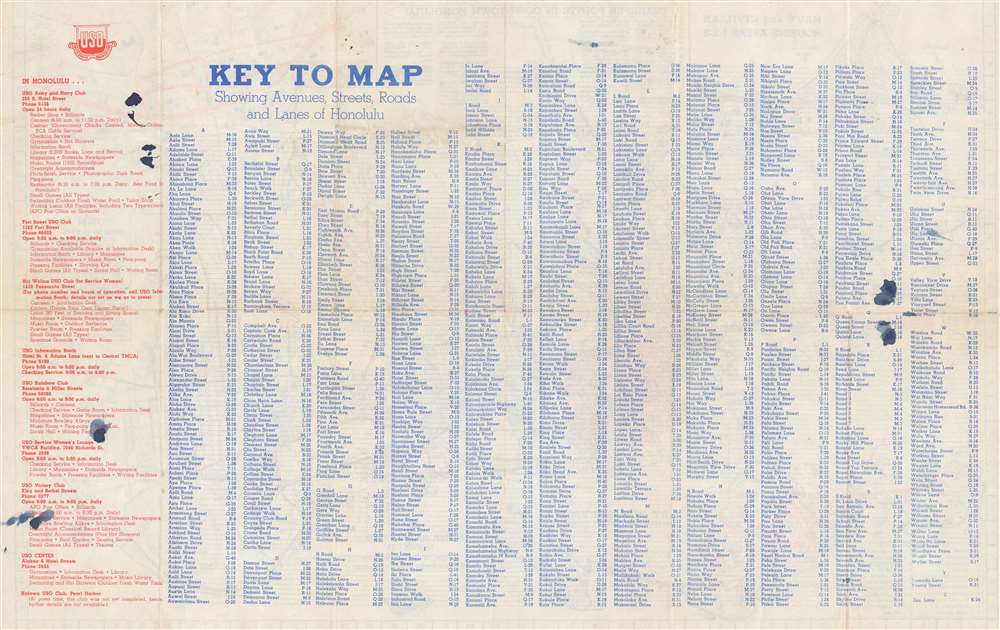 For WWII servicemen serving in Honolulu.
$250.00

This is a c. 1944 James B. Mann and USO of Hawaii city plan or map of Honolulu, Hawaii issued for service men and women during World War II. The map depicts the city from Moanalua Gardens to Kahala Beach and from Dowsett Highlands to Diamond Head. Numerous sites are identified, including beaches, parks, forts, stadiums, schools, canneries, and, of course, golf courses. Thick red lines overlaid on the map highlight bus routes, possibly to encourage the use mass transportation. An inset of downtown Honolulu appears in the upper right and identifies theaters and historic buildings. An inset in the upper left depicts Navy and Civilian Housing Areas 1-2-3. Between the two insets is a detailed commentary on downtown bus transfers. A third and final inset in the lower left corner details the bus network linking Pearl Harbor and Hickam Field with Honolulu and Woodland.

James Buzzell Mann (September 25, 1892 – March 30, 1959) was an American civil engineer best known for designing the Ala Wai Canal and Kapiolani Boulevard in Hawaii. Born in Portland, Oregon, Mann graduated from Oregon State College (then known as Oregon Agricultural College) in 1912 with a degree in mechanical engineering. After spending a summer working as a dock foreman, Mann continued his education by studying hydraulic engineering at the University of Wisconsin. After accepting a job to work on drainage and development in the Everglades, he moved to Florida in 1913. He returned to Oregon State for a winter of graduate work in highway engineering in 1915, and then decided to visit a friend who had moved to Hawaii. He bought a $40 rail and ship fare ticket, which included meals. The journey ended in Hilo via Corvallis, Portland, Astoria, San Francisco, and Los Angeles. Mann soon found a job as a surveyor and spend the ensuing forty years working on projects throughout the islands. It was during these early years in Hawaii that he designed the Ala Wai Canal and Kapiolani Boulevard. He soon moved on to a job with the U.S. Geological Survey, but when the U.S. entered World War I, he was sent to Virginia to train as a Army engineer. He never made it abroad, as he was on his way to Siberia when the war ended. He returned to Hawaii, only to find his job with the Geological Survey filled, leaving him without a job. He found a job working for the Bishop Estate, which he held for six years. He resigned to become a partner in the engineering firm of Wright, Harvey, and Wright in 1925 and opened his own firm in 1930. Mann married Henrietta Smith in 1922, with whom he had three children. Learn More...