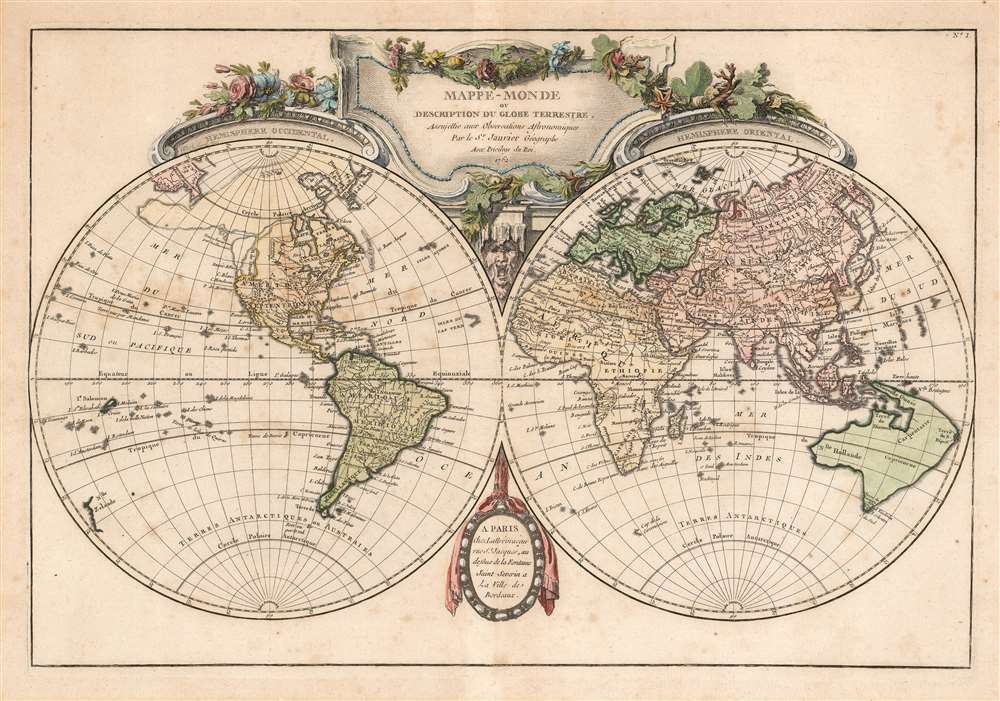 A beautiful and impressive 1762 Jean Janvier map of the world - rife with speculative cartography. Coverage embraces the world on a double hemisphere projection framed by elaborate baroque cartouche work.

A magnificent inland sea, the 'Sea of the West' or in this case the 'Mer de L'Ouest', is presented in the northwestern part of the America. This body of water was speculated by Philippe Buache and Jospeh-Nicholas De l'Isle in the early 18th century based upon wishful thinking, American Indian legends, and the somewhat questionable 16th century explorations of Juan de Fuca. Here Janvier gives the Mer de l'Ouest its fullest expression, though he specifically does not connect it to either the factual network of lakes and rivers extending westward from the Hudson Bay or to the speculative De Fonte network just to the north.

This is also one of the few maps to include the speculative 'Muller Peninsula.' Postulated by the German geographer Gerhard Friedrich Muller, the Muller Peninsula follows the Aleutian Islands roughly in the form of modern-day Alaska. Subsequent navigations by Cook and others would soon disprove the peninsula theory.

By contrast the northeast parts of Asia, which had recently been explored by Vitus Bering and Tschirikow, are depicted with a fair approximation of accuracy. Terre de Gama and Terre de la Company, speculative mis-mappings of the Japanese Kuril Islands by the 17th century Dutch explorers Maerten de Vries and Cornelis Jansz Coen, appear just northeast of Yedso (Hokkaido). Gama or Compagnie remained on maps for about 50 years following Bering's voyages until the explorations of Cook confirmed the Bering findings.

Australia and the Pacific

South of the Equator the shores of Australia or New Holland are speculatively mapped with a dotted line defining the southern and eastern portions continent. Van Diemen's Land or Tasmania is attached to the mainland, which itself includes New Guinea and parts of the New Hebrides, identified here as Terre de S. Espirit. Terre du St. Espirit, in fact the New Hebrides, was mis-mapped by the near insane 17th century Portuguese navigator Pedro Fernandes de Queiros, who proclaimed that he had discovered the Great Southern Continent, or Terre Australis. Not to be confused with modern day Australia, Terre Australis was a vast speculative continent that supposedly covered much of the southern hemisphere in Aristotelian symmetry with the bulk of Asia in the Northern Hemisphere. Although by this time most cartographers had stopped mapping Terre Australis, some, like Janvier, perhaps with the great myth in mind, wishfully increased Australia's dimensions.

In South America many of the speculative geographic elements common to earlier maps of the regions, such as el Dorado and Lake Parima, are absent though the Lago de Xarayes does remain. The Xarayes, a corruption of 'Xaraies' meaning 'Masters of the River,' were an indigenous people occupying what are today parts of Brazil's Matte Grosso and the Pantanal. When Spanish and Portuguese explorers first navigated up the Paraguay River, as always in search of El Dorado, they encountered the vast Pantanal flood plain at the height of its annual inundation. Understandably misinterpreting the flood plain as a gigantic inland sea, they named it after the local inhabitants, the Xaraies. The Laguna de los Xarayes almost immediately began to appear on early maps of the region and, at the same time, took on a legendary aspect as the gateway to the Amazon and the kingdom of El Dorado.

Africa, as usual, is mapped accurately along the coasts and speculatively in the interior. While numerous tribes, kingdoms, and desert caravan routes are noted, most of the interior is conjectural. The Nile follows the two-lake pattern developed in the 15th century on Ptolemaic maps. The gold mining region near the Kingdom of Monomotapa is labeled. South Africa is noted as the home of the Cafrerie and Hottentots.

Both hemispheres are crowned with an elaborate decorative cartouche in the late baroque style.

This map was drawn by Jean Janvier for publication as plate no. 1 in Jean Lattre's Atlas Moderne in 1762.