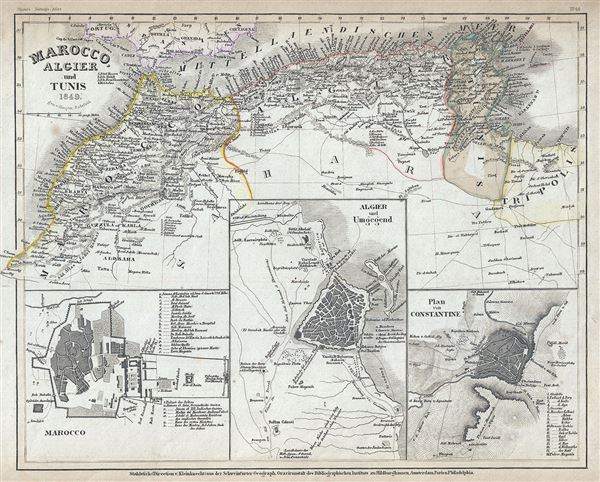 This is a fine 1849 map of the Barbary Coast by Joseph Meyer. It covers the northern Africa and the western Mediterranean Coast of Africa from Morocco to Tripoli, including modern day Morocco, Algeria, Tunisia and parts of Libya. Numerous cities, towns, oases, rivers and other topographical features are noted throughout. Three inset maps detailing Morocco, Algiers and Constantine are included along the bottom border.

Parts of North Africa, at the time were under the influence of the rapidly declining Ottoman Empire. The region would go on to be colonized by France, United Kingdom, Spain and Italy during the next century.

This map was issued as plate no. 44 in Meyer's Zeitung Atlas. Although all the maps in this atlas are not individually dated, the title page and maps were often updated while the imprint with the date was not, causing confusion to the exact date for some of the maps. Moreover some maps in the atlas were taped in at a later date as an update to the atlas. We have dated the maps in this collection to the best of our ability.

Very good. Minor overall toning and some spotting.
Looking for a high-resolution scan of this?