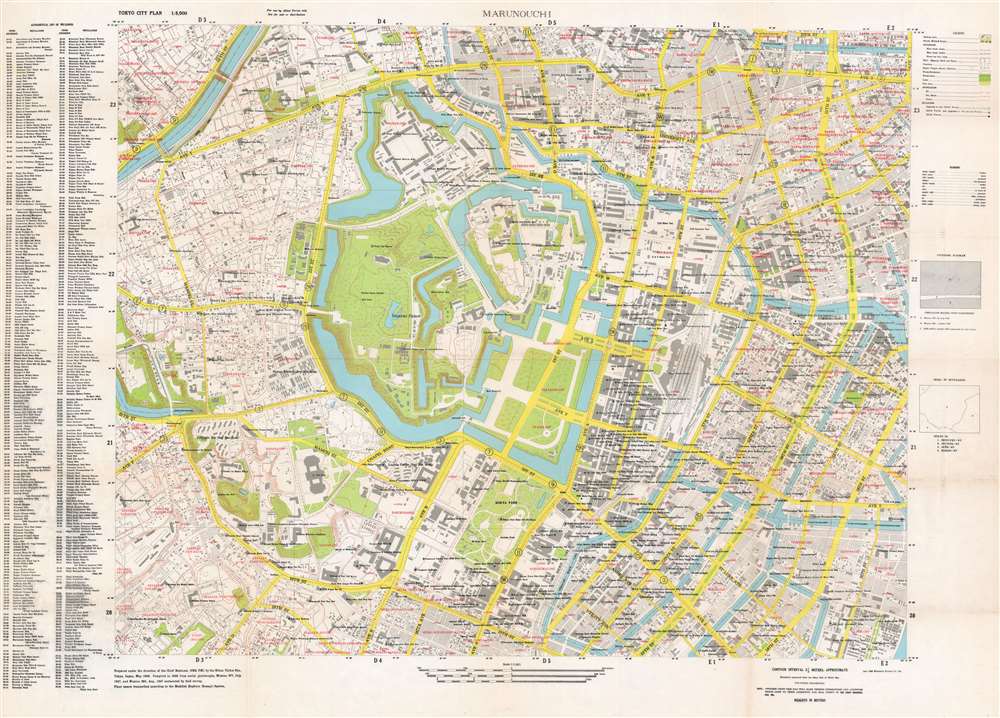 A map of central Tokyo created to help orient Allied personnel during the Occupation of Japan.
$1,800.00

This is a 1948 General Headquarters, Far East Command city plan or map of the Marunouchi District in central Tokyo, Japan, created for Allied (predominantly American) soldiers during the brief Allied occupation of Tokyo. This map provides an extraordinary overview of life in the city during an ephemeral period. Streets throughout the district are labeled, many of which, such as 1st Street, 10th Street, and 5th Street, were simply given names by the occupying officials who could not understand the Japanese names. Others are marked simply as Ave Y and Ave Z. Hundreds of locations are labeled by name and small circles, which identify whether that location is frequented by 'Allied Forces', 'Allied Forces and Japanese or non-Allied Forces', or 'Japanese or non-Allied Forces'. To cite only a handful of these: various motor pools, the American clubs, supply stores, and government office buildings are among these sites. Many are hotels and those billeted there, be they officers, enlisted men, women, or civilians, are identified in parentheses. Many GHQ buildings are noted, along with the headquarters of Stars and Stripes in Tokyo, the British Embassy, and the Japanese Diet Building.

The Allied Occupation of Japan

Preparations for the Occupation of Japan began soon after the Japanese government notified Allied forces that they would accept the Potsdam Declaration on August 14, 1945. This document, issued on July 26, 1945, outlined the terms under which the Allies would accept the surrender of the Empire of Japan. American personnel arrived in Japan on August 28, and the formal Japanese Instrument of Surrender was signed on the U.S.S. Missouri in Tokyo Bay on September 2. General Douglas MacArthur was named the Supreme Commander for the Allied Powers (SCAP) and placed in charge of the Occupation. Under his leadership, though nominally with the input of an advisory council, the Allied powers undertook the complete reorganization of Japanese society. These reforms included disarmament, liberalization, and democratization. By the end of 1945, over 350,000 U.S. personnel were stationed throughout Japan. The Treaty of San Francisco, signed on September 8, 1951, ended the occupation on April 28, 1952.

This map was prepared by the Nihon Chikei Sha under the direction of the Chief Engineer of the General Headquarters of the Far East Command in May 1948 and printed by the Mitsumura Printing Company Limited in June 1948. At least three different editions of this map were published. It is unclear which edition was the first, but it is likely the one printed by the 64th Engineer Base Topographic Battalion, making the present example the second edition. A third edition was published by the Kyodo Printing Company in 1949. The OCLC records examples of this map as part of the institutional collections at the Massachusetts Institute of Technology, the University of California Berkeley, the Library of the National Diet in Tokyo, and the National Library of Australia, although it is unclear exactly which edition each example represents. We are aware of one example of what we believe to be the first edition which is part of the institutional collection at Princeton University.