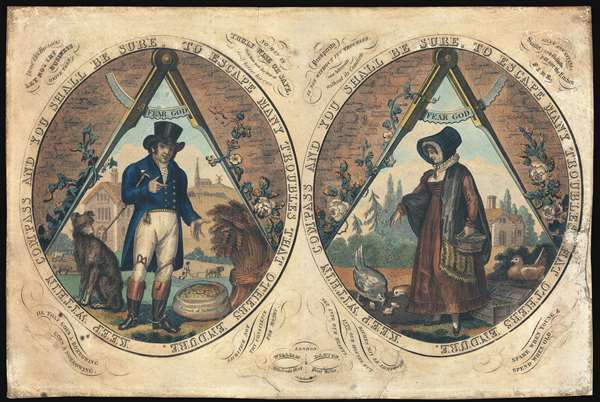 An unusual and rare c. 1820 William Darton masonic allegorical broadside intended to promote the masonic virtues of self-restraint and balance. Unlike most allegorical educational broadsides of the period that illustrate both men and women, this production by Darton emphasizes no particular difference between the path of virtue for women vs. men. Both the male and female medallions are situated within the compass, a central Masonic symbol characterizing restraint, and illustrate individuals of both humility and means. At the feet of both are sacks/chests full of bullion, suggesting wealth, while to their left are domesticated animals, an Irish wolfhound for the man, and chickens for the woman. Behind each are prosperous country homes.

The figures are surrounded by tidbits of wisdom, some drawn from Biblical sources:

Sacrifice not they Conscience for Money.
Spare when Young, and Spend when old.
He that Goes a Borrowing Goes a Sorrowing.
etc…

Variant forms of these images appear in England and North America from roughly the mid-18th century. This example, from the 19th century is late, but distinctive as coming from the workshop of Print and Map Seller, and Freemason, William Darton. Examples of this broadside are today quite rare.