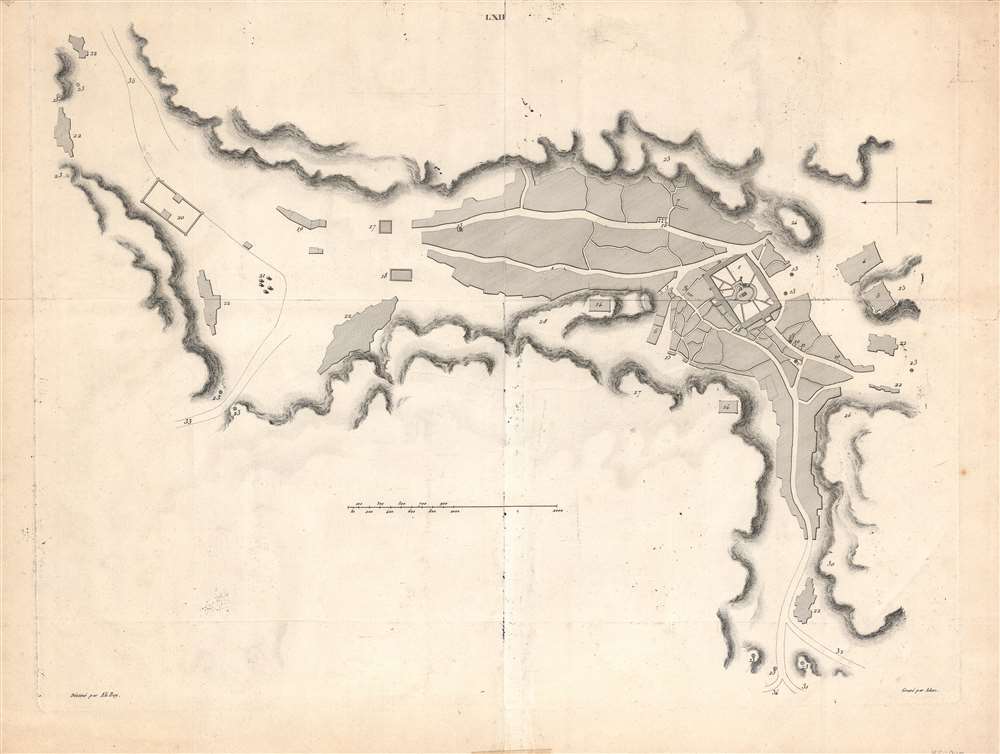 A groundbreaking 1814 map of Mecca by Ali Bey el Abbassi. This was the first accurate city map of Mecca produced by a non-Muslim European - Ali Bey el Abbassi, a Spanish-born Arabist who spent years traveling throughout Arabia and North Africa. It displays the holy city as it appeared in the early 19th century.

Oriented towards the east, the city of Mecca is illustrated with the Masjid al-Haram and the Kaaba at right-center. Above (to the east) of the Great Mosque is the mountain Abu Qubays. The rectangular structure at left is likely the Jannat al-Mu'alla, the cemetery for family members of the Prophet Muhammed. Other holy sites are numbered, presumably for identification with an index unfortunately not present.

Though simple in appearance, this map was the product of a remarkable journey by the Barcelonian Domingo Francisco Jorge Badía y Leblich, better known by the name he used when traveling through the Muslim world, Ali Bey el Abbassi (see biography). Several non-Muslim Europeans had travelled to Mecca in the centuries before Ali Bey el Abbassi, and a crude and inaccurate map of the Masjid al-Haram by the French-English merchant Jean Chardin had been drawn based on second-hand information from a Hajji. Some prints depicting the Kaaba and other nearby holy sites also circulated in western Europe in the 18th century. Still, this map and the other drawings and descriptions that accompanied it were the first detailed and accurate accounts of Mecca produced in western Europe, influencing later travelers like Sir Richard Francis Burton. Incidentally, Ali Bey visited Mecca during a brief period when the Emirate of Diriyah, a predecessor to today's House of Saud, had wrested control of Mecca from the Ottomans.

Ali Bey el Abbassi (1767 - August 30, 1818) was a Spanish expert on the Arab world who published a detailed account of Arabia, North Africa, and the Levant in 1814. Though he extensively documented his travels, the details of Ali Bey el Abbassi's life remain uncertain. By his own account, he was born Domingo Francisco Jorge Badía y Leblich in Barcelona, but due to his father's profession travelled throughout Spain and to London. Becoming fascinated with Arab culture and the Arabic language, he began studying both intensively before living in Morocco for two years, convincing others that he was a Muslim and a descendant of the Abbasid caliphs, and then traveling to Mecca on the hajj before moving through the Ottoman Empire and then returning to Spain. A committed Bonapartist, he fled to France at the conclusion of the Napoleonic Wars and published an account of his travels. Ali Bey then returned to the Ottoman Empire under a different assumed identity and possibly working as an agent for the French state when he died in Aleppo in 1818, possibly by poisoning. Since most of the information about him is autobiographical, some contemporaries and later Arabists doubted elements of his accounts and thought that he may have been a Jew or in fact a Muslim from Morocco who had been educated in Spain. Assuming he was actually a Spanish-born non-Muslim, though he was not the first non-Muslim European to enter Mecca, Ali Bey el Abbassi did provide the first extensive descriptions, drawings, and maps of the city. Learn More...