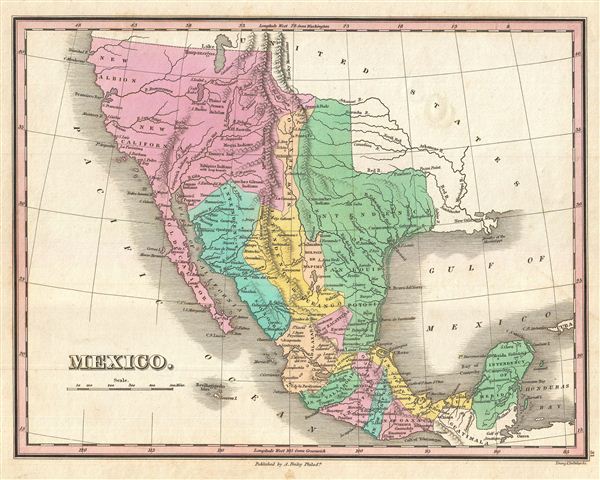 A scarce and important 1827 map of Mexico by Anthony Finley. Covers from upper California and New Albion south to Guatemala, including the modern day regions of California, New Mexico, Arizona, Colorado, Utah, Nevada, Texas and Mexico. Offers an interesting pre-Republic mapping of Texas folded into the Intendency of San Louis Potosi. Here New Mexico, previously a vast territory, is limited to a narrow sliver of land attached to the upper Rio Norte or Rio Grande.

Further west this map really gets interesting with the explorations of Escalante and Humboldt very much in evidence. Finley curiously charts two lakes in the Great Basin, one labeled Timpanagos and another smaller lake further south labeled 'Salt Lake.' The Great Salt Lake is said to have first been seen by Europeans in 1824, only a few years before this map was published, so it is unlikely that Finley drew from this exploration. Instead, Finely is following Escalante's discoveries as recorded on the Miera map. The Escalante expedition actually visited Utah Lake (Timpanagos), but only heard about the Great Salt Lake from local Native American Ute tribe. Miera, Escalante's cartographer, thus mapped Timpanagos as much larger than the unseen 'Great Salt Lake.'

In addition to geographical notations, Finley also identifies a number of American Indian nations including the Moqui, Apache, Juma, Nochi, Poagos and Yahipias (with long beards). Engraved by Young and Delleker for the 1827 edition of Anthony Finley's General Atlas.