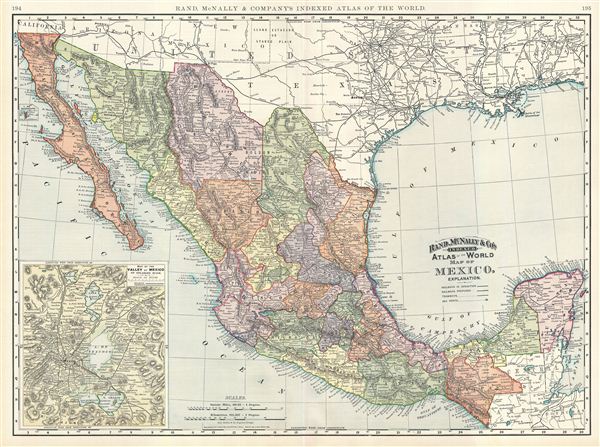 This is a beautiful example of Rand McNally and Company's 1891 map of Mexico. It covers all of modern day Mexico along with parts of neighboring United States and Central America. An inset in the lower left quadrant features a map of the valley of Mexico. Porfirio Diaz was at the time the President of Mexico. Though some believe him to have been a dictator, the period of his leadership was characterized by a period of economic growth and stability in Mexico. Color coded according to states and regions, the map notes several towns, cities, rivers, mountains, and various other topographical details with relief shown by hachure. This map was issued as plate nos. 194 and 195 in the 1895 issue of Rand McNally and Company's Indexed Atlas of the World - possibly the finest atlas Rand McNally ever issued.