1845 Radefeld Map of Mexico and the Republic of Texas 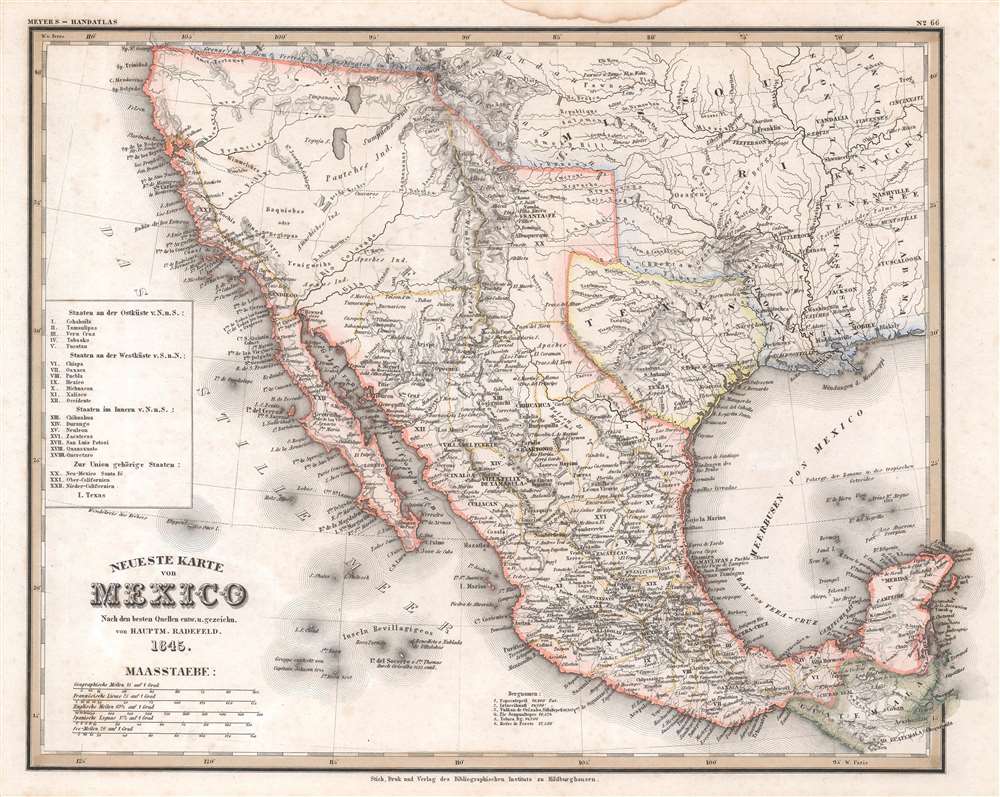 1845 Radefeld Map of Mexico and the Republic of Texas

This is an 1845 Carl Radefeld map of Mexico and the Republic of Texas. Published on the eve of the Mexican-American War (1846 - 1848), Mexico stretches from Oregon to Guatemala, the border of the 1819 Adams-Onís Treaty. The Republic of Texas appears in one of its smallest border configurations, suggesting that the German cartographers were sympathetic to Mexico's arguments about Texas's rightful borders and not the more expansive borders advocated by Texans. Rivers are labeled throughout, including the Colorado, Nueces, and Rio Grande. Two mythical rivers, the Buenaventura and Francisco, are also identified, and two great salt lakes illustrated. San Antonio, Santa Fe, Albuquerque, Mexico City, and Veracruz are named, along with numerous other cities and towns. Mexican states are labeled using Roman numerals corresponding with an index along the left border.

The borders of the Republic of Texas were in dispute from the earliest days of the Texan Revolution. The Republic-claimed borders followed the Treaties of Velasco between the newly created Texas Republic and Mexican leader, Antonio López de Santa Anna. The treaties established an eastern boundary following the 1819 Adams-Onís Treaty between the United States and Spain, which established the Sabine River as the eastern boundary of Spanish Texas and western boundary of the Missouri Territory. The Republic's southern and western boundary with Mexico was more nuanced. Texas claimed the Rio Grande del Norte as its western and southernmost border, while Mexico argued for a boundary much further east at the Nueces River. When Texas was annexed into the United States, the agreement followed the Republic claimed boundary, thus absorbing Mexican claimed territory as far west as Santa Fe. This escalated already existing tensions between the United States, the former Republic of Texas, and Mexico, ultimately triggering for the Mexican-American War (1846 -1848).

Carl Christian Franz Radefeld (1788 - 1874) was a German cartographer. Radefeld studied law and theology in Jena and began working as a lawyer in 1811. In the early 1840s, Radefeld began working in cartography in Augsburg, where he worked with Joseph Meyer and Meyer's publishing house Bibliographisches Institut. Learn More...


Joseph Meyer (May 9, 1796 - June 27, 1856) was a German industrialist and publisher, most notably for the encyclopedia Meyers Conversation-Lexicon. Born in Gotha, Germany, Meyer was educated as a merchant in Frankfurt am Main. He moved to London in 1816, but returned to Germany in a820 after his stock speculations and business adventures fell through. Once back in Germany, he began by investing in the textile trade (1820-24). Meyer began creating business plans concerning how to start railways soon after the first steam-hauled railway began operation in December 1835. He founded the Deutsche Eisenbahnschienen-Compangie auf Actien (German Railway Rail joint stock company) in 1845. Meyer also found great success as a publisher, utilizing the system of serial subscriptions to publications, a new idea for the time. He founded a company, Bibliographisches Institut in Gotha in 1825, which published several versions of the Bible, works of classical literature, atlases, the world in pictures on steel engravings, and an encyclopedia. Learn More...