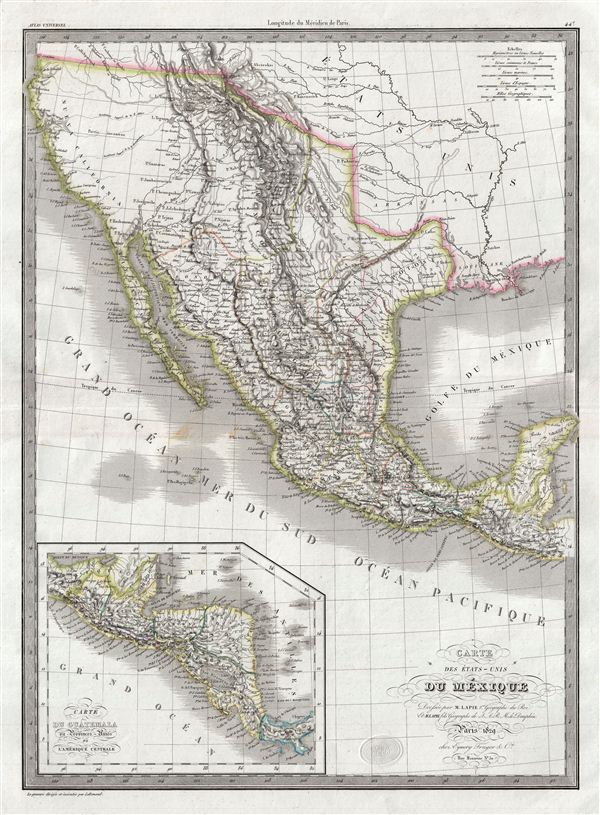 A beautiful but little known 1829 first edition map of Mexico and its pre-1849 North American claims in Upper California and Texas by Emile Lapie. The map covers all of Mexico from Cape San Sebastian and the Missouri River south to include modern day Mexico, the Yucatan, and, via inset, Central America. Lapie's map offers fine detail throughout with elevation rendered by hachure and political boundaries demarcated with outline hand color.

Loosely based on an earlier map of the same region by Brue, another French cartographer, Lapie's map incorporates elements from Alexander von Humboldt's map of 1811 as well as the explorations of American military men Zebulon Pike and Stephen Harriman Long. The abandoned French settlement of Champ d'Axile in eastern Texas, then a part of the intendancy of San Luis Potosi, is noted. Further north, the Great Basin exhibits cartography reminiscent of the escalante expedition with Great Salt Lake (L. Timpanagos) and Utah Lake (L. Teguayo) connecting to the Pacific via the apocryphal rivers Millers and Buenaventura. Lapie indicates the Santa Fe Trail from St. Louis to Santa Fe. No trace of the Sierra Nevada range or the discoveries of the fur trader Jedediah Smith is in evidence.

This map was engraved by Armand Joseph Lallemand as plate no. 44 in the first edition of M. Lapie's important Atlas Universel. This map, like all maps from the Atlas Universel features an embossed stamp from the Lapie firm.