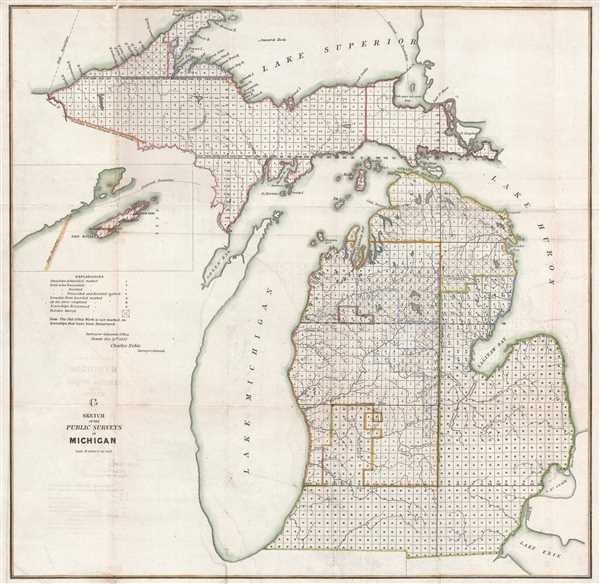 Illustrates how land was surveyed in the State of Michigan.

This is an 1852 Charles Noble land survey map of Michigan. The map depicts the state from Lake Superior to Lake Erie, Ohio, Indiana, and Illinois and from Wisconsin to Lake Huron. Illustrating the current status of the land survey in Michigan, each township is labeled throughout the entire state is labeled according to its status. The township was created as the measure of the Public Land Survey System, which was first widely implemented to survey the Northwest Ordinance. The Public Land Survey System allowed for the systematic surveying and mapping of any territory gained by the United States. A table explaining the various different notations is situated along the left border, below an inset of Isle Royale. Highly detailed, the township grid is labeled, allowing for easy identification of any specific township. Lakes, rivers, and points along the coast of the Upper Peninsula are labeled. Lake Michigan is illustrated in its entirety, along with part of Lake Superior, Lake Huron, and Lake Erie. We also have a Land Survey map of Michigan from 1855, which allows for an intriguing glimpse into the progress of survey work in Michigan during these years.

This map was produced by the Public Land Survey in 1852 and approved by Charles Noble, the Surveyor General.