1861 Mitchell Map of Michigan and Wisconsin 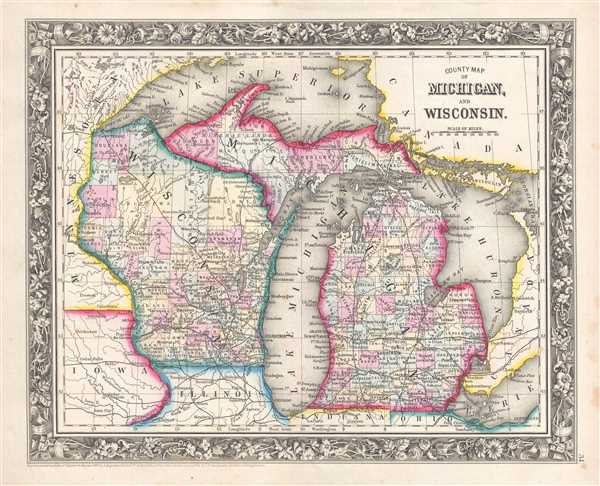 1861 Mitchell Map of Michigan and Wisconsin

Illustrates the ever-expanding rail network in the region.

This is an 1861 Samuel Augustus Mitchell, Jr. map of Michigan and Wisconsin. The map depicts the region from Minnesota and Iowa to Canada, Lake Huron, and Lake Erie and from Lake Superior to Illinois, Indiana, and Ohio. The railroad network in the region is illustrated in detail, though none of the routes are labeled. One such route most likely belongs to the Michigan Central Railroad, which was originally incorporated in 1837 to run between Detroit and St. Joseph, on Lake Michigan. The original organization, named the Detroit and St. Joseph Railroad, quickly went bankrupt and was purchased by the State of Michigan, who renamed it the Central Railroad of Michigan. In 1846 the company was reprivatized and renamed the Michigan Central Railroad. By 1861, the Michigan Central Railroad had rectified all previous problems created by its turbulent beginning and become a reliable railroad, operating between Chicago and Detroit.

Individual counties are illustrated, labeled, and shaded different colors to allow for easy differentiation in both Michigan and Wisconsin. Cities, such as Milwaukee, Green Bay, Detroit, Saginaw, Ann Arbor, and Lansing are labeled in Michigan and Wisconsin, along with myriad other towns and villages. Cities in the neighboring states, such as Chicago, Toledo, Iowa City, and Cedar Rapids are also labeled. Rivers, creeks, and lakes are illustrated as well, though not all are labeled.