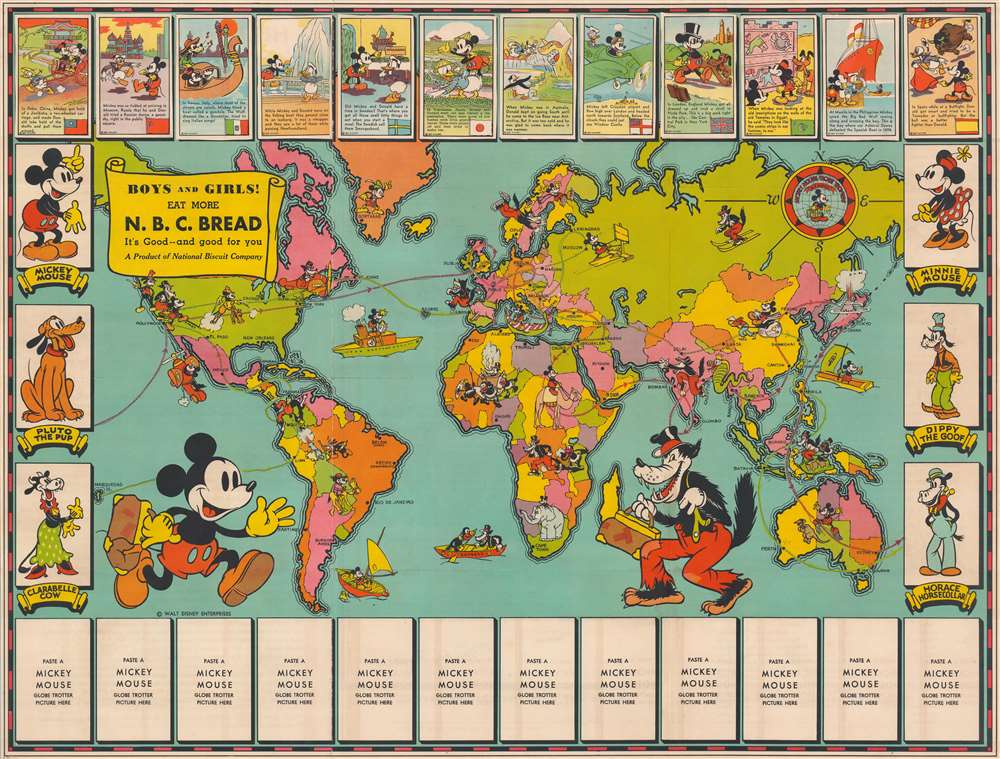 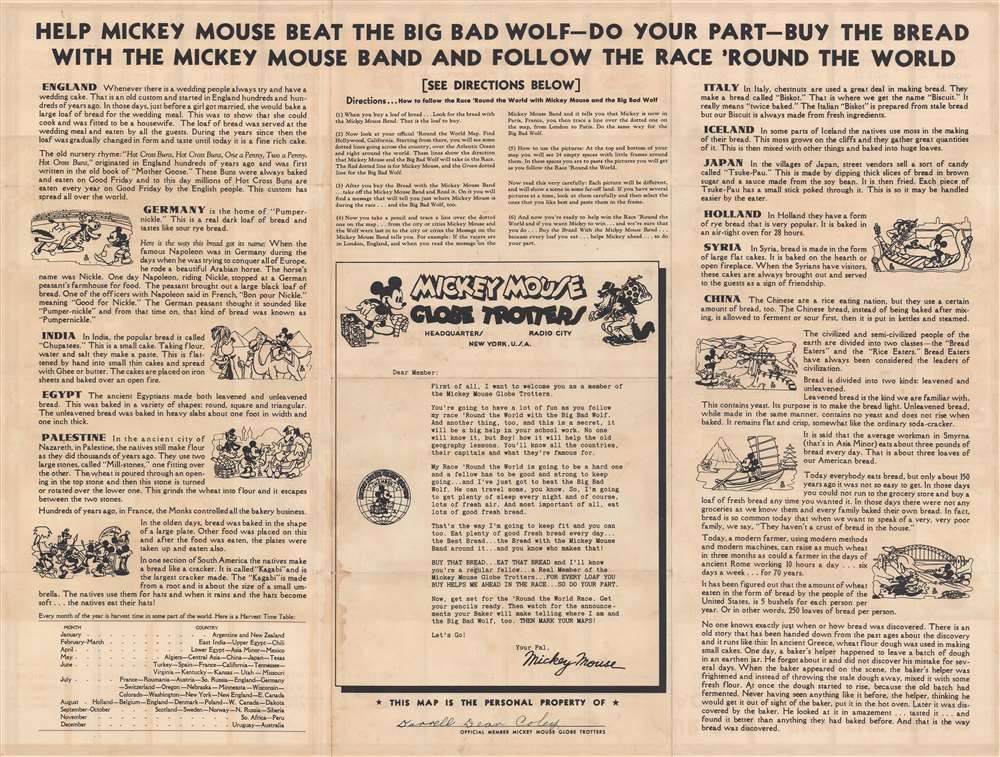 This is a 1936 Walt Disney Mickey Mouse Globe Trotters Club pictorial map of the world issued as part of the first advertising campaign for sliced bread - that's right 'Sliced Bread'! The map depicts the world from the Americas, across the Atlantic Ocean to Europe, Africa, and Asia, to Australia and the Pacific Ocean.

Mickey Mouse and the First Advertising Campaign for Sliced Bread

In today's hyper-commercial society, it is hard to believe that advertising for something as ubiquitous as sliced bread had a genesis. Here we have an example of that beginning, a map created as the first advertising campaign for sliced bread. Created during some of the hardest years of the Great Depression, this clever campaign was aimed at children. It is a race around the world between Mickey and the Big Bad Wolf. In order for a child to follow along with Mickey on his adventure, they would need to ask their local grocer for a mail-in application. Then, members would receive a button emblazoned with 'Mickey Mouse Globe Trotters Club' and an image of Mickey himself, along with the present game board. Each game board features twenty-four blank rectangles along the top and bottom, where children could affix their 'globe trotter' trading cards, packaged in specially marked loaves of bread. The present example advertises N. B. C. Bread.

Numerous vignettes adorn the map, as Mickey and the Big Bad Wolf walk, fly, ride, and sail across the world, including two large portraits along the bottom border. Mickey has a fantastic voyage, traveling by steamship, gondola, camel, elephant, horse, and rickshaw. Accompanied by a kangaroo, Mickey is illustrated hopping across Australia with springs on his feet. Misfortune, however, seems to follow the Big Bad Wolf throughout his trip, as he is chased by a king cobra, gored by a bull, and shot at by a cannon. He is also cooked as part of a native tribe's stew. Somewhat outdated illustrations of tribal groups appear in Africa, Southeast Asia, and the South Pacific, incorporating stereotypical red lips and grass skirts. Here, the Big Bad Wolf and the natives ride a large turtle. The logo of the Mickey Mouse Globe Trotters Club is situated in the upper right, and portraits of Minnie Mouse, Goofy (called Dippy the Goof), Horace Horsecollar, Clarabelle Cow, Pluto, and Mickey himself.

The present example of this map was owned by a child named Darrell Dean Coley who managed to collect twelve 'globe trotter' trading cards, here pasted in the spaces provided along the top border. These trading cards illustrate Mickey and his friends at different points on the journey. Among the locations on the cards present on this example are Venice, Moscow, Pekin (Beijing), Yokohama, London, and Manila.

The verso is also full of content, including information about numerous countries and their bread-eating and -baking habits. Several vignettes of Mickey and the Big Bad Wolf's trip are also present, as is a letter from Mickey to the newest member of the Mickey Mouse Globe Trotters.

This map was copyrighted by Walt Disney Enterprises and first appeared in 1936. We note a single cataloged example in OCLC which is part of the collection at the Newberry Library. We are aware of one other example in private hands.