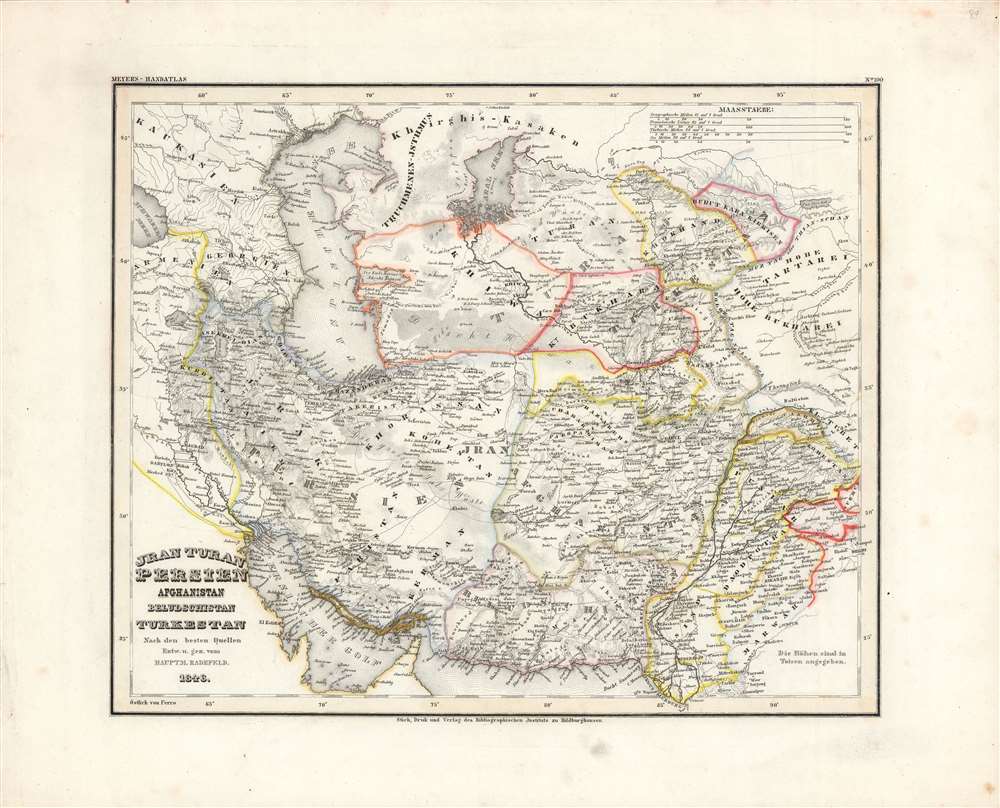 This is Carl Radefeld's appealingly hand-colored 1846 map of the Middle East and Central Asia, produced for Meyer's Grosser Hand-Atlas. It depicts the region as both British and Russian influence were increasing, setting off the 'Great Game' competition between the two empires.

Coverage extends from the Caucuses to Tibet, taking in the modern nation-states of Iran, Pakistan, Afghanistan, and the Central Asian states. Cities, roads, and geographic features are marked, including terrain such as the Dasht-e Kavir, the great salt desert (Salz Wüste) of Persia. The borders of the region empires, khanates, and other territories are outlined in different colors to allow for their easy distinction. Scales are provided in geographic or German miles, French leagues, Turkish miles (fersah فرسخ, roughly equivalent to the Persian parasang), and nautical miles.

This map was made in the wake of important conflicts that set the stage for a wide-ranging imperial competition between Russia and Britain. Russia had defeated Persia in two wars and established itself as the dominant power in the Caucasus. Meanwhile, the Afghan Durrani Empire was conquered by the Sikhs, who in turn were subjugated by the British. A new Afghan Emirate (the Barakzai dynasty) arose and was quickly caught between Russian and British intrigues, dealing the British a stunning defeat in the First Anglo-Afghan War (1838-1842). Russia's early forays into Central Asia did not fare much better, with an 1839 expedition against Khiva ending in disaster. But, like the British, by the 1850s-1860s, the growing military disparity between Russia and its opponents made Russian victory nearly a foregone conclusion.

'The Great Game' was a diplomatic confrontation between the British and Russian Empires over Afghanistan and other territories in Central and Southern Asia. Russia feared Britain was making commercial and military inroads into Central Asia, an area long within the sphere of influence of St. Petersburg. Britain, conversely, feared Russia making gains in India, 'the jewel in the crown' of British Asia. The escalating tensions led to several wars and proxy wars: The First Anglo-Afghan War, the First Anglo-Sikh War (1845 - 1846), the Second Anglo-Sikh War (1848 - 1849), and the Second Anglo-Afghan War (1878 - 1880), along with the Russian annexations of Khiva, Bukhara, and Kokand. In the 1870s-1890s, a series of diplomatic agreements gradually settled British and Russian spheres through the regions represented here, but distrust and tensions remained well into the 20th century.

This map was engraved, printed, and published by Carl Radefeld of the Bibliographisches Institut in Hildburghausen, a company founded by Joseph Meyer. It appeared as map No. 100 in Meyer's Grosser Hand-Atlas, a landmark work of mid-19th century German cartography. Although the map itself is dated as 1846, the Grosser Hand-Atlas was not published and distributed until 1860. This map is only independently cataloged among the holdings of three institutions, while Meyer's Grosser Hand-Atlas is held by perhaps a dozen institutions in North America and Europe.


Carl Christian Franz Radefeld (1788 - 1874) was a German cartographer. Radefeld studied law and theology in Jena and began working as a lawyer in 1811. In the early 1840s, Radefeld began working in cartography in Augsburg, where he worked with Joseph Meyer and Meyer's publishing house Bibliographisches Institut. Learn More...