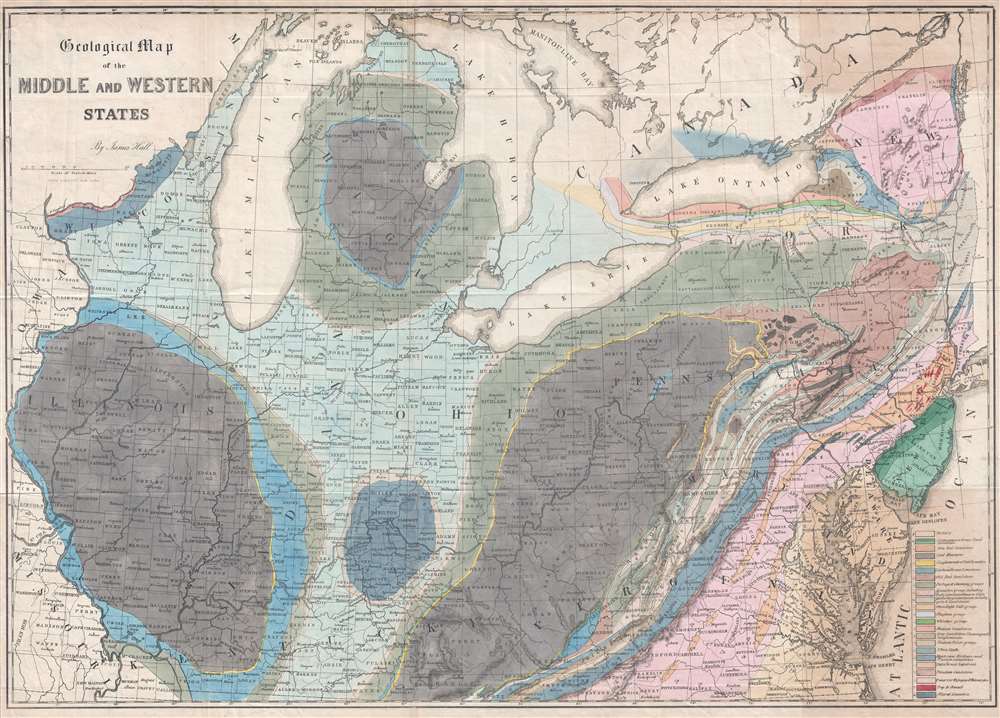 Considered to be a landmark map in the field of geology, as it was the first to utilize the 'New York System'.
$1,200.00

This is an 1843 James Hall geological map of the central United States. The map depicts the region from the Mississippi River to the Atlantic Ocean and from the Straits of Michilimackinac (Michillimaoinac) and Montreal, Canada to Virginia, Kentucky, and Missouri. As the first published map to use the 'New York System' of stratigraphic nomenclature, developed by Hall and other members of the New York Geological Survey, Hall's map is considered a landmark map in geological cartography. Rivers, lakes, and other physical features are also illustrated, with four of the five Great Lakes situated along the top.

'The New York System' of Geology

The 'New York System' focused on the importance of using paleontology to delineate geological layers. Here, twenty-three different geological layers and formations are illustrated using various colors to indicate where each layer or formation lies.

This map was created by James Hall, engraved by Endicott and Company of New York, and published in Hall's Geology of New York. Part IV. Comprising the Survey of the Fourth Geological District. in 1843.

James Hall (September 12, 1811 - August 7, 1898) was an American paleontologist and geologist. Born in Hingham, Massachusetts, Hall was the oldest of four children born to James Hall Sr. and Sousanna Dourdain Hall, who had emigrated from England two years earlier. Hall attended the Rensselaer Polytechnic Institute, from which he graduated with honors in 1832 and he received a master's degree from the same institution the following year. After completing his master's degree, Hall stayed at Rensselaer and taught chemistry and later geology. In 1836, Hall was appointed to the team working on a geological and natural history of New York. That first year he was assigned as Ebenezer Emmons's assistant, for who he studied iron deposits in the Adirondack Mountains. The following year, after the survey was reorganized, Hall was put in charge of the Fourth District, in western New York. After completing the survey in 1841, Hall was named the first state paleontologist of New York. Hall published the findings of the survey in 1843 as Geology of New York Part IV. This work received much acclaim and became a classic in the field. Thanks to this success, Hall had established a solid reputation and spent the rest of his life studying stratigraphic geology and invertebrate paleontology. Hall constructed a laboratory in Albany, New York, which quickly became an important institution for aspiring geologists and paleontologists to study and train. Today, this laboratory is known as the James Hall Office and was designated a National Historic Landmark in 1976. Following the survey of New York, Hall participated in a geological survey of northern Michigan and Wisconsin in 1850, and served as state geologist for Iowa from 1855 until 1858 and for Wisconsin from 1857 until 1860. In 1866, Hall was appointed the director of the New York State Museum of Natural History in Albany, and was appointed State Geologist of New York in 1893. Hall was a founding member of the National Academy of Sciences and served as the first president of the Geological Society of America. In 1838, Hall married Sarah Aikin, with whom he had two daughters and two sons. Sarah passed away in 1895. Learn More...