1866 Johnson's Map of Missouri and Kansas 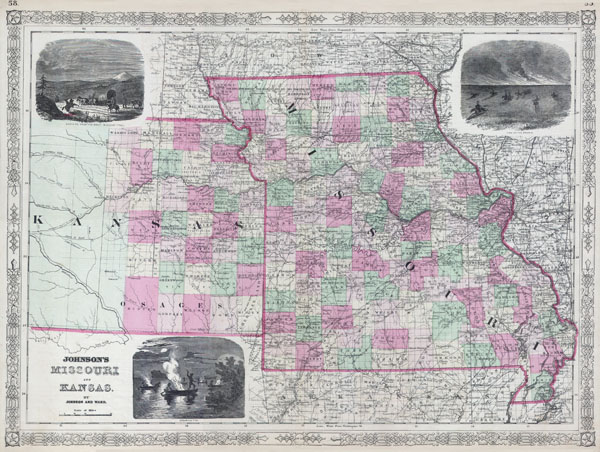 1866 Johnson's Map of Missouri and Kansas

This is Johnson and Ward's 1866 map of Missouri and Kansas. Covers the state divided into counties with special attention to transportation, especially roads, railroads, and canals. Features three inset woodcuts: 'Fire on the Prairie,' 'Santa Fe From the Great Missouri Trail' and American Indians 'Spearing Fish' at night from river canoes. Depicts the two states in an early configuration with western Kansas largely unexplored. Includes important roads such as the Santa Fe Road and the proposed route of the Union Pacific Railroad. Also noted are numerous American Indian tribes, forts, passes, topographical details, proposed railroads, mines, etc. Features the fretwork style border common to Johnson's atlas work from 1863 to 1869. Steel plate engraving prepared by A. J. Johnson for publication as plates no. 58 and 59 in the 1866 edition of his New Illustrated Atlas… This is the last edition of the Johnson's Atlas to bear the Johnson and Ward imprint.